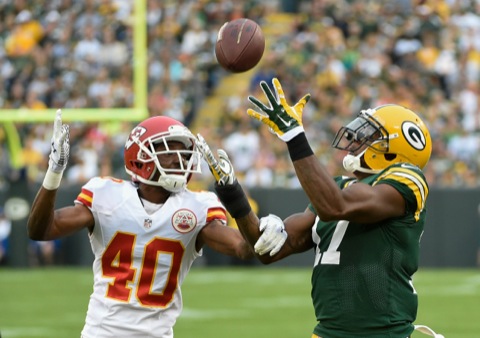 There were some who thought second-round pick Davante Adams would challenge Jarrett Boykin for the Green Bay Packers No. 3 receiver job.

That never really happened and it’s now clear that Boykin will enter the season in that role. On Wednesday, coach Mike McCarthy was praising Boykin for making another jump.

So does this mean I should draft him in fantasy?

Adams, meanwhile, has been inconsistent.

Oh, so you’re telling me the rookie isn’t solid day in and day out? Really? I never would have thought!

Adams will surely get some snaps in the regular season, but he probably won’t get many. In 2013, when they finally developed a running game, the Packers went away from the four-receiver set they used fairly often in previous years.

In the first 15 games of the 2013 season, none of the No. 4 receivers played more than eight snaps. The Packers actually split their tight end out wide more often.

The trend figures to continue with Richard Rodgers and, at some point, Brandon Bostick playing tight end. Both are known more as receivers than blockers.

That’s not to mention a running game that’s even stronger than it was entering last season, if only because it’s a known commodity.

Not enough balls to go around the way it is, so don’t expect the guy who’s no better than No. 6 in the offensive pecking order to be handling the rock a lot.

On top of that, rookie receivers typically don’t make much of an impact with the Packers anyway. Both James Jones and Greg Jennings had at least 45 catches and 600 yards in their rookie seasons, but they also started for a good portion of the year.

Barring a couple injuries, Adams won’t be a starter.

Here’s what some recent Packers receivers did as rookies.

There’s no doubt Adams has talent and he could be a force down the road. He’s not going to be one this year though.

We fully expect him to come in in that 30-catch, 300-yard range much like Nelson and Cobb did before him.