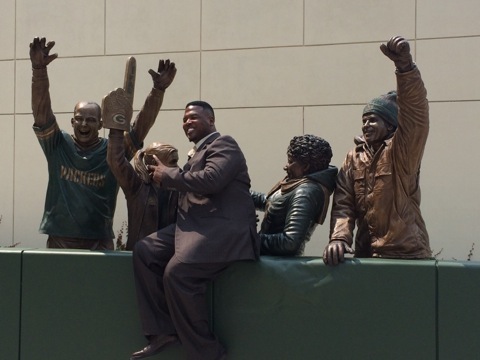 On Friday, the Green Bay Packers unveiled a Lambeau Leap statue outside of Lambeau Field.

It’s bronze, features four fans and sits below the statues of Vince Lombardi and Curly Lambeau. It is also, in a word, lame.

The Lambeau Leap was first executed by safety LeRoy Butler in a victory over the Oakland Raiders in December of 1993. Butler took a lateral from Reggie White, ran it in for a touchdown and then just kept going and jumped into the stands.

Here’s the play, courtesy of your crazy uncle Ed’s living room TV, which is operating on rabbit ears.

At the time, no one made any note of Butler’s leap. Not the TV crew, nor Jim and Max. The aftermath of the play was spent wondering whether it was actually a touchdown or not because there wasn’t an immediate signal from the refs.

While Butler made the first leap, receiver Robert Brooks popularized the celebration primarily because he spent a lot more time in the end zone.

He actually had the audacity to record a rap song about the Lambeau Leap called Jump in the Stands.

Note to all football players. You are not musicians. Do not record albums.

Boy, was that awful.

Now, of course, everyone who scores for the Packers in Green Bay is expected to the jump in the stands.

Interestingly, the NFL has been eliminating celebrations from the game in recent years because we wouldn’t want anyone to have fun or show any sort of personality. In doing so, they cite sportsmanship and taunting and they’ve pretty much eliminated everything that isn’t spiking the ball or pumping your fist.

Except the Lambeau Leap. By the definition of the NFL rules, it should be illegal. However, the league has decided to either turn a blind eye toward it or they’ve grandfathered it in as an acceptable celebration, depending on who you believe.

So there’s your history lesson on the Lambeau Leap. We tell you all of this because the statue doesn’t actually have a leaper in it. Just four fans — which the Packers went out of their way to make diverse — and a hole in the middle of them.

Great for photo ops, we imagine, but it doesn’t really speak to the history of the team.

“Originally we thought maybe we would have a player and the fans would come around him, but utimately, we decided that we thought the fans would be portraying the player, or portraying LeRoy,” Packers president Mark Murphy said. “Coming up with four fans, we tried to come up with what we thought was a good cross-section, the average fans sitting in the end zone.

“Looked at a lot of different pictures and studied all kinds of different things people would be wearing to make it as accurate as possible.”

Yeah, we get it. People can pretend they’re doing the Lambeau Leap.

That kind of cheapens the whole thing, not to mention an iconic event in team history, if you ask us. We’re not the Jacksonville Jaguars. Fans don’t need a diversion to take their focus away from the fact that their team and organization is a joke.

History. Not to pretend they’re doing the fucking Lambeau Leap.