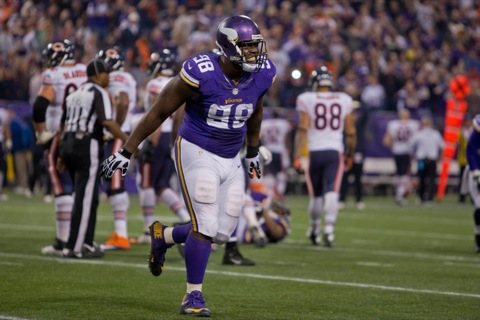 Applause all around. Nose tackle Letroy Guion made his training camp debut for the Green Bay Packers on Monday. That would be good news if this were the end of July and not the end of August.

Guion, who was signed after being released by the Minnesota Vikings this offseason, has been sidelined with a hamstring injury for all of training camp. Until Monday, that is!

The Packers signed Guion, a starter for most of the last two seasons with the Queens, to be B.J. Raji’s backup. And then of course B.J. Raji was lost for the year, but Guion had been standing around doing nothing for too long to take advantage of that situation.

So now the guy will literally get two practices and part of a game to try to make the team.

Monday was the Packers’ last full-pads practice. They have a light practice on Wednesday and then their final preseason game Thursday night.

Seriously, the Packers seem pretty much set at nose tackle. They’re moving Josh Boyd, who played nose in college, over from defensive end. We also have undrafted free agent nose tackle Mike Pennel penciled in for a roster spot.

Guion could be an insurance policy, but it’s hard to justify keeping a guy you’ve seen do football-related activities with your team for three days.

So why don’t we let this serve as a lesson?