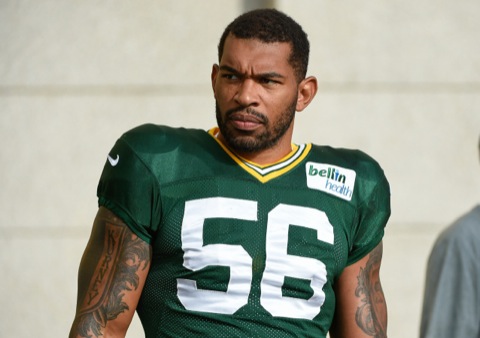 You’ve probably heard the stories about how Julius Peppers takes plays off on a pretty regular basis. Apparently, a change of scenery hasn’t done anything to alter his style.

It’s tough to get a read on OLB Julius Peppers, who clearly knows how to – ahem – pace himself during camp. But McCarthy told me all indications are he’s a great fit. It should help Peppers that the Packers have no intention of playing him 800-plus snaps like he did last season in Chicago.

Now, we’re not going to sit here and chastise Peppers for not practicing hard. We knew what we were getting when we signed him — a guy with freakish ability who, because he has freakish ability, coasts on his talent more often than most guys.

Of course, most guys don’t have that much talent to coast on, so it kind of works itself out in the end.

Peppers is a guy who always could have been greater than he is, if he just would have tried harder. But he never did and we’re not expecting him to now.

He’s still pretty good giving a half-assed effort. And who knows. Maybe keeping him fresh will make him want to give full effort more often.

Few Surprises on Packers Depth Chart, Except the Bottom