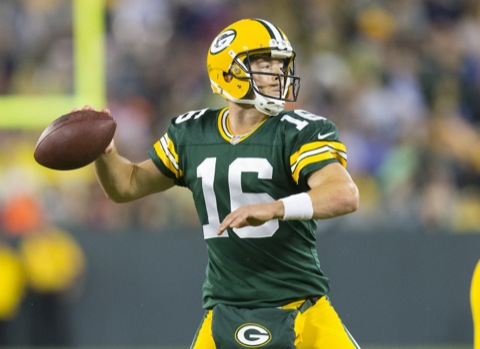 The Green Bay Packers finalized their 2014 53-man roster on Saturday — the initial one, anyway. We’ve already looked at the guys they cut. Here’s who they kept and what we find interesting about that.

What is actually interesting is the Packers apparently still view Flynn as the No. 2, even though he was outplayed by our boy Scooter Tolzien during the preseason.

It seemed like the Packers would end up with six receivers. We thought that guy would be Myles White. A lot of people thought it would be Kevin Dorsey. Alex Gillett even had a decent case. The Packers don’t NEED six receivers, but they had the talent to go heavy at the position. The only question mark entering the final week of the preseason was Janis and he easily locked up a roster spot with is performance in the final game.

To be quite honest, it became more and more surprising to us that Quarless stuck as the day went on. We had him on our final 53, but he was one of the last guys to make it. Quarless has experience, but is no more than an average tight end and he does nothing on special teams. It seemed logical to rid the team of a mediocre veteran in order to keep a youngster with promise. Logic is not always applied at 1265 though.

No surprises at all here. Derek Sherrod sucks, but he’s a former first-round pick and the Packers lack options, so there’s not really anything else to do but keep him. We would not be surprised at all if the Packers sign another offensive lineman.

Five defensive linemen is not an ideal number, but the Packers didn’t really get production from any other defensive linemen during the preseason. In fact, they didn’t get any production from Guion because he had a hamstring injury, but he managed to make the team anyway. That does not make us confident in this group entering the season. If they get in a pinch, it looks like the Packers will turn to Julius Peppers and Mike Neal, both of whom have played defensive end. Pennel was one of two undrafted rookies to make the team. That should be a surprise to no one.

Frankly, we were a little surprised that Child Warrior Andy Mulumba made the roster. Yes, he was on the roster last year, but where was he this preseason? Fending off warlords? We didn’t see him do anything on the field. Elliott was the second undrafted rookie to make the team. Again, that should come as a surprise to no one.

This is a pretty underwhelming group, but it’s exactly the underwhelming group we expected. There had been some debate about whether Bradford, a fourth-round pick, deserved a roster spot. Based on his play, the answer is no. He was moved from outside linebacker to inside linebacker just last week. We’re guessing Bradford showed enough in that brief audition to make the Packers think he still has some potential.

As you know, we are absolutely appalled that the Packers kept Goodson instead of Jumal Rolle. Rolle outplayed Goodson throughout camp, by a wide margin. In fact, Rolle outplayed a lot of guys. Meanwhile, Goodson’s play made it clear he isn’t ready to contribute. On top of that, he didn’t even play in the final preseason game. The only logical explanation here is the Packers kept Goodson because he’s a draft pick. So let this be a lesson to all of you out there. Don’t you dare come to Green Bay and outplay one of Ted Thompson’s draft picks.

Woooooo! Specialists! Here’s a question. Why do the Packers need a guy who’s only a long snapper? We’re not suggesting Brett Goode isn’t good at long snapping, but is this really that hard of a job that one of the other two centers on the roster couldn’t do it? You know, then you’ve got yourself another roster spot for a guy who does something other than throw a ball backwards between his legs.

We know, a wild suggestion.

At any rate, the practice squad is up next.