Colt Lyerla Has Been Waived 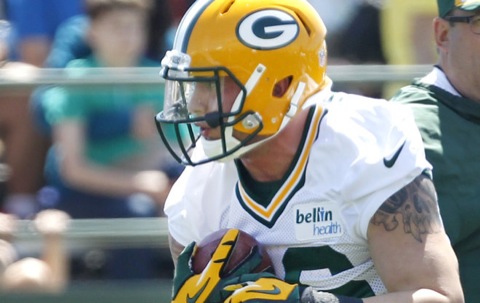 The Green Bay Packers have given up on everyone’s favorite tight end, Colt Lyerla. Kind of.

The team waived Lyerla with the injured designation. He suffered a knee injury during Family Night and wasn’t going to be healthy enough to play until after the regular season started.

Here’s why we say kind of. The Packers have given up on Lyerla for this year. If he clears waivers, they’ve told him they’ll bring him back and stash him on injured reserve.

Packers have waived TE Colt Lyerla injured. He said they told him he if he clears waivers he will be placed on full-season IR.

If that happens, Lyerla wouldn’t be eligible to play this year, but he would have a shot at making the Packers again next year.

And from what we’ve heard, he’s clearly making the team and becoming an All Pro immediately.

Seriously though, you’re probably wondering why the Packers didn’t just put Lyerla on IR instead of waiving him, letting him go through waivers and then re-signing him just to put him on IR.

Well, money, of course. That and they don’t think anyone will claim him, which is why they didn’t do the same thing with Don Barclay.

And the Packers are probably right. It seems almost out of the question that another team would take a chance on an injured player with Lyerla’s track record at this point.

We’ll know for sure tomorrow.