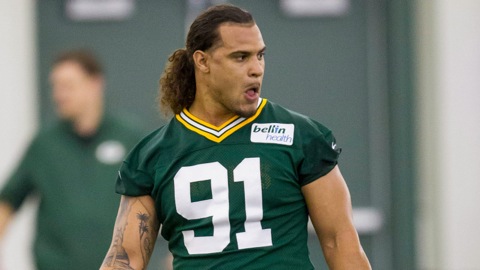 We were going to try to be PC about this, but let’s just get it out there. It’s about fucking time. The Green Bay Packers finally took a look at Carl Bradford at inside linebacker.

Bradford, a fourth-round pick, has been toiling at outside linebacker for the entirety of training camp prior to Monday’s practice. He’s been overmatched and has really made zero impression on the outside.

It’s been so bad for Bradford, who played a hybrid defensive end/outside linebacker in college, we were starting to wonder how the Packers could justify keeping him on the roster over a guy who can contribute like Child Warrior Andy Mulumba or Jayrone — Don’t Call Me Jerome — Elliott.

The only reason we can think of is that Bradford is a 2014 fourth-round pick and no one likes to admit they boned it on a draft pick this soon.

He demonstrated playmaking ability, a knack for the football and all of that in college, but doesn’t have the measureables that NFL teams look for in an outside linebacker. To boil that down, he’s too small and his arms are too short to work effectively against NFL tackles.

Where’s this going? We’re really not sure.

We still don’t see how the Packers can keep Bradford on the active roster. He’s been a complete non-factor.

Now they’re going to try him out at inside linebacker with a week left in the preseason? That seems like a solid strategy.

At this point, we can totally see the Packers releasing Bradford and signing him to the practice squad. He’ll get picked up by another team  that will convert him to inside linebacker immediately and then he’ll go on to be a starter for 10 years for them.