This Bro is Awesome and Is Totally Getting Laid 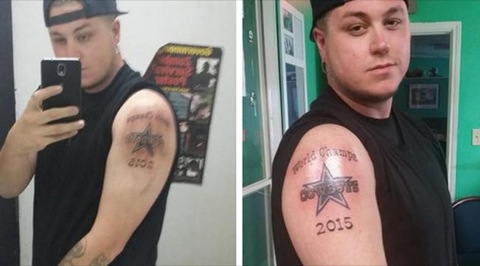 This is apparently the thing for idiot sports fans to do now — get a tattoo proclaiming your team champions for the upcoming season.

I don’t know when this first happened, but it seems like it was a year or two ago. Then, it was somewhat of an interesting novelty. We all said, “That guy sure is a moron, but he’s a moron with balls!”

Then, like anything that idiots do, other idiots started copying it. Because fuck originality! We’re idiots!

Certainly there are at least five people unaware that some other bozo already perpetrated this stunt and they will totally worship me for my ballsiness and badassery!

Not just any shitbird though, a total bro.

Note the backwards bro cap just like his hero, Brony Romo, the bro squint that tells you he smoked an awesome spliff 20 minutes ago and the sweet-ass earring that may be a hoop or may just be a rubber band hanging from his ear in totally non-ironic fashion because he has no idea who Captain Lou Albano or anyone not in a frat is.

It’s true! Your Cowboys and their awesome defense are totally winning it all this year!

And you, this is the year that you get all kinds of pussy! And not that welfare check/baby mama pussy like before! We’re talking low-rent strippers and that girl that works at 7-Eleven!

This is your year, bro!

Previous Article
Jerel Worthy was a Panic Pick
Next Article
Hey Guys, Remember When the Packers Drafted All Defense?