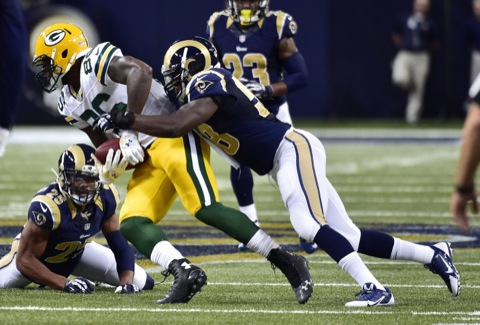 Brandon Bostick seems to have a legitimate shot to start at tight end for the Green Bay Packers. He’s a more dynamic pass catcher than Andrew Quarless and a better blocker than Richard Rodgers.

What Bostick doesn’t have that those other two guys have is optimal health. So we’re changing that to “did.” Brandon Bostick did have a legitimate chance to start at tight end for the Green Bay Packers.

Bostick, who entered the game after Rodgers on Saturday, caught one pass for nine yards. He suffered the injury on that catch.

Bostick would play one more play before exiting the game for good.

So while Bostick is arguably the Packers most complete tight end, standing on the sidelines for the final two weeks of training camp pretty much assures he won’t be in the starting lineup in week one.

That makes the starting tight end job a two-man race between Quarless and Rodgers. Although Quarless had the better game on Saturday (a team-high four catches for 58 yards), Rodgers appears to have the advantage. The Packers have used him with the first team in both preseason games. Quarless got those catches on Saturday against second and third-team guys.

The downside with Rodgers is he isn’t much of a blocker, something that was apparent on Saturday.

The same could be said for Bostick last year, but he appears to have improved enough to at least be serviceable as a blocker. What he also appears to be is injury-prone.

We still anticipate Bostick will get plenty of playing time when he is healthy. He may eventually end up claiming that starting spot, but for now it appears to be Rodgers’ to lose.

Previous Article
Uh Oh, Derek Sherrod!
Next Article
Who the Hell is This Jayrone Elliott Character?