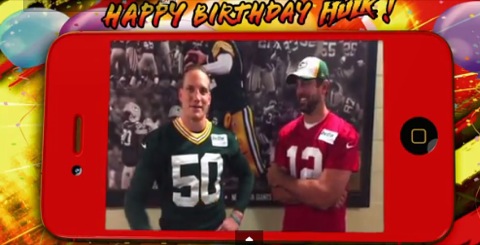 Hulk Hogan is somehow not only still alive, but it appears he’s back in the WWE. He appeared on Raw on Monday night and a bunch of celebrities wished him a happy birthday.

This is the same Hulk Hogan who took down Andre the Giant at Wrestlemania III back in the fucking 80s. How old is he now? In his 70s or something?

And, I mean, who doesn’t like their wrestlers old and decrepit, shadows of their former selves? Clearly, the best version of Ric Flair was saggy, disgusting, slow, ugly version.

Yeah, it’s true. I have never been a fan of the Hulkster. Give me Macho Man Randy Savage any day. A fucking leg drop is not a finishing move.

Anyway, some tools are fans of the Hulkster. Two of those tools are named Aaron Rodgers and A.J. Hawk.

Really, are you surprised that A.J. Hawk is a wrestling guy?

Hawk and Rodgers were in this birthday montage that aired last night.

You need a montage! Montage!

Previous Article
Who the Hell is This Rajion Neal Character?
Next Article
Good Riddance Jerel Worthy