Aaron Adams is Out for the Year 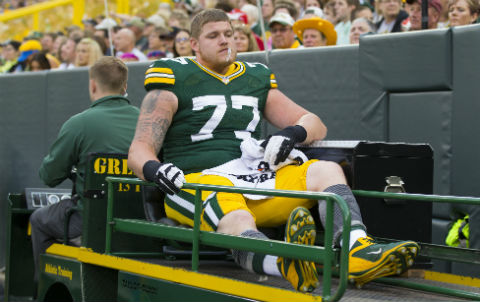 If tackle Aaron Adams was being considered for a spot on the Green Bay Packers final roster, he isn’t anymore.

Adams tore his ACL on Thursday night and will miss the year. On the bright side, one of the Packers’ roster moves has been decided for them. Adams will get a first-class ticket to injured reserve.

We did have Adams on the borderline, although he didn’t make our final roster. After spending part of 2013 on the Packers practice squad, Adams played well enough this preseason to warrant consideration for a roster spot.

He also plays a position where the team lacks depth. After the starters, the only offensive linemen who are going to make the roster are Derek Sherrod, who’s really not that good, guard Lane Taylor and center J.C. Tretter, who’s going to be out for at least the first month of the season.

Adams joins Don Barclay and Jared Abbrederis in that group. The Packers should have about 15 ACL tears by year’s end, according to my calculations.