Will It Really Be This Year for Brett Favre? We Shall See 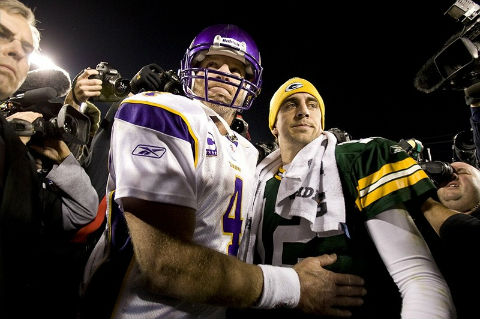 *IF* this is all Mark Murphy said on the matter of a Brett Favre return to Lambeau, it would seem it is not at all determined that Judas will return this year, but rather that Murphy and his men are once again simply begging the egomaniac to do so.

His statement makes mention of talking and being hopeful. Nothing indicates it is a done deal.

Lacking any semblance of dignity or self-respect — after all, by stating that he is not in fact afraid of getting booed or jeered, Berty basically called Murphy a liar — this strikes me as a prophylactic measure to contain the very same sort of drama this man has been inflicting on us since before 2007. Starting with the will-I or will-I-not-retire drama, such dramatics eventually ballooned into the ultimate backstabbing against the Packers, which further instigated a veritable civil war among Packers fans and erstwhile turncoats. A civil war which I thought was settled with a calamitous second year as a Viking and the Packers’ hoisting of the Lombardi Trophy in Dallas.

I will believe it when an actual date is confirmed. As for the sort of lockstep, uniform adoration this asshole demands, absolute adoration that silences all dissent, silencing any booing or jeering, I will not believe that until I see it — a day I would truly come to rue with gnashing of teeth. It really seems that the fact that many Packers fans are not all smiles and sunshine and refuse to simply turn our cheek and lick his ass like so many pandering lapdogs would do far more damage than one would otherwise expect to his gigantic but still fragile ego. To humble him so may only be just a taste of tit for tat, not quite achieving the just desserts of full retribution that he so richly deserves. But any small taste of tit for tat is better than none at all.

Mark my words, before all of this is said and done, Berty Judas will have once again betrayed those Packers fans who still adore him: Packers fans who continue to extend this man an unbelievable gesture of kindness and goodwill and forgiveness. An incredible gesture made despite donning the uniform of the ENEMY and doing everything in his power to make the Vikings Super Bowl champions (that mere phrase propels me into vertigo) and irretrievably derail the McCarthy-Rodgers era. A vendetta that, but for one fluke 12th man penalty and subsequent interception in New Orleans, he very nearly succeeded in exacting. He will either delay it another year, or not come back until after being admitted into the Hall of Fame, or he will draw the tortuous affair out yet further by hemming and hawing, pussy-footing around, just as he did with the shall-I-retire or shall-I-not soap opera. Favre will once again prove that, as that Minnesota beat reporter stated in Last Day at Lambeau, “Brett Favre does not give a shit about you, Packer fans.”

As for the turncoats still in our midst, i.e. those despicable subhuman vermin who were donning enemy colors in our very presence and at that most crucial hour when the enemy were at our very gates, and who are now once again coming out of the woodwork like the cockroaches that they are?  Their loyalty is to Favre and not to the Packers, and their adoration and allegiance to him is as unwavering as it is blind and downright vile. For me, it all comes to show that the death penalty is truly the ideal and just sanction for high treason. Indeed, how nice would it be if we could, for once and for all, dispense of these traitorous elements from our midst for all time. Peace, unity, and brotherhood in Packerland would at long last be restored.

A few visual reminders of the ongoing Civil War in Packerland.  Thanks, Brett. 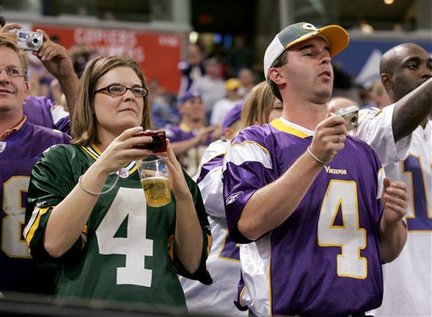 God damn turncoats, treading on our colors. Off to the gallows! 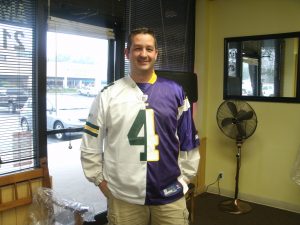 Remember monstrosities like these, desecrating our Green and Gold colors with those of the enemy? 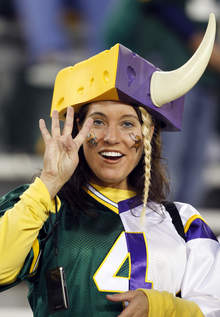 A rare case of leniency? Perhaps, but only because she is a woman and kinda cute. Really deserves a hard, brutal grudge fuck, however. I wonder though if Berty ever texted her. Regardless, don’t tread on our colors!