Reverence for the Oval G 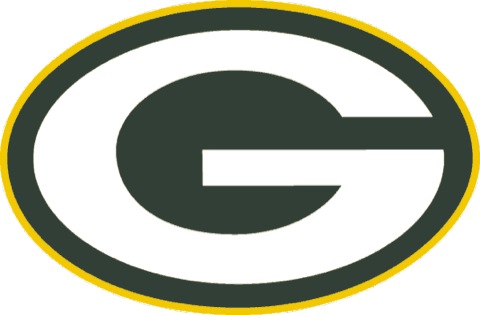 Among the countless number of things about the Green Bay Packers I admire and even revere — including the rich history as THE charter professional football team unsurpassed in excellence and unequalled in championships, their improbable setting in a small town in Northern Wisconsin, the striking color schemes of Green and Gold that signify the presence of our team so distinctly — perhaps nothing moves me quite as much as that sacred oval G symbol brandished on those helmets of our Green Bay Packers.

The very perfection of design, that oval G symbol stands out boldly. And yet it is simple and austere, just an elongated white G in a forest green oval. That classic simplicity is its very genius. It is that very genius of simplicity which renders it superior to more modern, but gaudy, overwrought designs, such as that ugly bank logo embraced by the Patriots, or other fanciful, but failed designs of secondary and tertiary expansion teams like the Titans or Jaguars or Panthers that no one cares about.

The Packers oval G symbol: I am transfixed by it. I imagine I could stare at it until doomsday. Indeed, the single most exhilarating element of a game is to see, or even think about, all those Gs on those helmets as the Packers take the field, ready to strike and playing to win. Even in the offseason, just writing about it, let alone thinking about it, infuses my bloodstream with endorphins, raising my heart rate. This is doubtlessly why this symbol will never change. And it is also why I am almost overcome with bloodlust at the mere suggestion of departing from this sacred design.

Because this very oval G symbol is of the very utmost importance, indeed sacred, perhaps the Packers organization should take better care to ensure that it is not adorned on any surface on which it is necessarily subject to defacement or soiling, or otherwise cheapened or sullied. Very much like the symbol of an imperialist nation, this oval G symbol should be brandished with the same sort of “flag cult” idolatry that the American flag is ideally treated with, preventing it from touching the ground or being defaced or soiled. While the organization did rightly intervene against our oval G symbol from being amateurishly plastered on three-inch PLATFORM heels with sequins, although perhaps not out of a sense of protective reverence, but from monetary concerns, there are other items apparently endorsed by the organization that probably ought not be.

Perusing the Packers Pro Shop, I was pleasantly surprised by the few examples that could be objectionable, far less than I recall actually. Still, there were some.

First and foremost were flip-flops, for men and women, with that marvelous symbol unfortunately placed on the face of the lining where the heel rests.

Setting aside strong objections to men wearing flip flops at all, as I care not to see the ugly unmanicured feet of men in public anywhere at any time ever, even the female version is offensive. The wearer of either item is literally walking on this symbol that we should all revere, defacing it with dirt, perspiration, and all sorts of other nastiness.

Similar objections also pertain to socks with which the wearer also effectively walks on and thereby soils and defaces this iconic mark.

Other items should also invoke outrage and indignation. This “sportula” and set of tongs places the symbol in such a way as to be inevitably scuffed and defaced by cooking surfaces like grills and skillets and soils it with foodstuffs including meats, sauces, oils and greases:

Sadly, it gets worse. Here is a pet bowl from which dogs—DOGS!– eat off the face of this symbol.

Although it is only a partial caption of that Packers helmet with the oval G, Fido will still be eating off it, defacing it with dog food, both the dry kibble and the smelly wet stuff, as well as dog slobber. And here is a dog toy in with which Fido can chew on and slobber on this revered symbol.

When one steps backs and really reflects at length on what these items really mean, the only rational conclusion can be that such items can only be suitable for rival fans. If you have a dog, give him a Vikings toy to chew and slobber on.

Finally, the catalog of the online shop differs somewhat from my recollection, in that it does not at this time feature men’s underwear that similarly renders this oval G symbol subject to soiling or defilement, particularly given the hygiene and personal habits of some men, which ought to compel them to wearing brown or black undergarments only. Such an item can however be found on the NFL pro shop.

And it seems that the legal department has not yet unleashed the hounds on this bit of infringement, admittedly far less offensive because it is (hopefully at least) a pair of women’s undergarments, but I suppose that would depend greatly on the lady who adorns them (and slips them off).

Quite a curiosity indeed, as it is the particular context alone in which they are situated that determines whether they are sacrament or sacrilege.

But at least as far as the men’s boxers go, one would not desecrate the American flag (or whatever nation one pleads allegiance to) by wearing it as underwear. So why are people doing this to our oval G symbol?

I love this Packers team so much, for so many reasons. Everything about the Packers, the history, the tradition, the colors and uniforms, the unique, improbable setting that is only rendered possible by this team’s very tradition and history of excellence, all of it transcend professional sports. This is why the Packers do not just have a national following — there are Packers bars all across the continent — but indeed across the globe. One fellow moved from Australia to Wisconsin because of this very mania that this team tends to infect its legions of fans with. Our Packers are one of a few select marquee teams that transcend not just local affiliation, but nationality. Beyond the Pittsburgh Steelers, teams like the New York Yankees, Boston Celtics, and Montreal Canadiens loosely come to mind, but not quite, as even people in Australia and Europe are drawn to our mystique. Soccer (or international football) teams like Real Madrid or Bayern Munich or Manchester United come to mind, as they too have following not just in their home countries, but across the globe, even here in the States.

That sacred oval G symbol, perhaps more than anything else, represents and signifies this transcendent entity that is the passion of so many millions: the Green Bay Packers. It is something I BELIEVE in and revere, perhaps as much as anything on this earth. And I know I am not alone. And since so many legions of us do revere it, let it always be properly displayed with reverence, and never in a way that cheapens it, or sullies or defaces its glorious luster as the eternal, undying star that it is, representing the very splendor and greatness of our Green Bay Packers!