Ndamukong Suh Gets Into it with Packers Fan 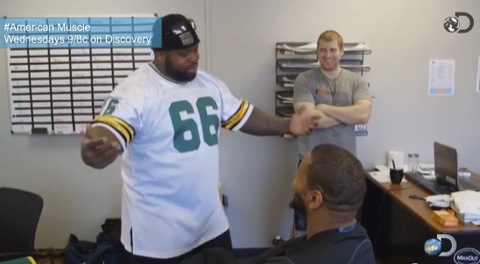 Detroit Lions piece of shit Ndamukong Suh is going to be on a show called American Muscle tonight. Who gives a shit, right? Well, maybe you do. He has an exchange with one of the guys on the show who’s a Green Bay Packers fan.

Basically, this dude rubs it in Suh’s face that he plays for a joke of an organization like the Lions and that he’s a giant fucking turd known more for dirty plays than anything else.

So good work on that.

Now, you’re probably like, what the fuck is American Muscle? Well, again, who gives a shit?

It’s another reality show, which I need like a hole in the head. By the looks of it, it’s about muscleheads. Greaaaaaaaaaaat.

I mean, was Guy Fieri and his mid-90s highlights not available to annoy the fuck out of me? Surely, that fucktard has room in his schedule for another show where he jams cheeseburgers into his fat face.

No, let’s get some damn muscleheads, one of whom has the kind of voice that makes you want to jam your fist down his throat, grab a hold of his vocal chords and rip them the hell out.

And hey, let’s throw in the lovable Ndamukong Suh.