Murphy Says the Packers are Playing in London 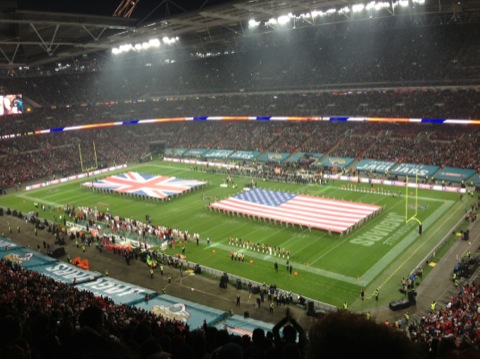 After the shareholder’s meeting yesterday, Green Bay Packers president Mark Murphy talked about the possibility of the team playing in one of the league’s annual London games.

We know the Packers aren’t going to give up a home game to do so, so you don’t need to worry about that. They make too much money to give up a game at Lambeau Field. Not to mention, season ticket holders would lose their shit if they were getting one less game.

The Packers would be the away team in any London game. Only teams that suck and/or have shitty fan bases and can’t sell out home games end up being the home team in London.

That’s why the Jacksonville Jaguars have a four-year agreement to play games there.

And speaking of that junior varsity squad, the Packers are scheduled to play them in 2016. So that’s probably the contest right there.

“I think our fans here would love to travel to London, and I think it’d be a great experience. We’ll see. There’s only certain teams that play home games in London, so those kind of have to match up,” Murphy said. “The other issue, quite honestly, and I think we’ve talked about this before, is that we travel so well that teams are reluctant to give up a home game against the Packers to play in London because it’s typically a guaranteed sellout.”

Yeah, but the Jaguars couldn’t sell out your mother’s bathroom, so that doesn’t matter when they’re part of the equation.

At any rate, this seems like it would be a great excuse for all of us to go to London.

We Know Why Jordy Nelson Hasn’t Gotten a New Deal