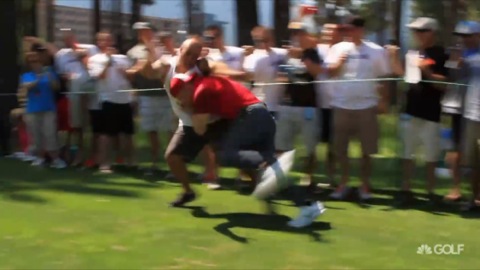 The Green Bay Packers linebacker is playing in the American Century Championship in Lake Tahoe this weekend. He was on the links on Thursday and some random dude asked Hawk to tackle him.

Not really a form tackle, but then, this is A.J. Hawk we’re talking about. He never wraps up. It’s just a good thing this guy was a stationary target or things would have gotten embarrassing.

On another note, there appears to be some strange subculture out there that fetishizes getting tackled by A.J. Hawk. This isn’t the first time something like this has happened.