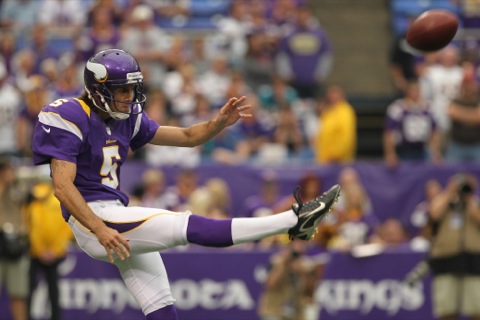 I’m going to pause here so you can laugh heartily…

It gets better, but let’s go over the background here before we get to that.

Kluwe is an outspoken proponent of gay rights. He was cut by the Vikings last year and then claimed that special teams coordinator Mike Priefer of made homophobic remarks and, ultimately, his views were the reason why he was cut.

That prompted an independent investigation by the organization. Kluwe wants the findings of that investigation made public. The Vikings don’t. Hence, the lawsuit.

“It’s outrageous to me that the Vikings would choose to hide the facts of the investigation from me and from their fans,” Kluwe said. “Minnesota Vikings fans are the real losers in this sad affair. The fans deserve to know that what I said about Priefer and the way the Vikings let me go was the truth. I was persecuted and then fired for standing up for what I believe in, all because some small-minded, bigoted people think that homophobia is OK in the NFL. It is not OK, and now it seems like we’ll have to go to court to force the Vikings to admit that.”

Minnesota Vikings fans are the real losers. Ain’t that the truth!

In soooooooo many ways.

It’s About the Money for Jermichael Finley