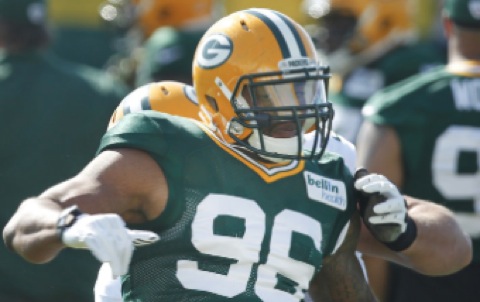 The 2014 Green Bay Packers have now made it through two padded practices: one on Monday and one on Wednesday with an NFL mandatory day off in between.

First, let’s be clear about the fact that NOTHING of import is ever decided or discovered in the first week of training camp unless someone important gets injured. So far, and let’s put that in caps — SO FAR — the injuries have been of no concern.

Jerel Worthy, Nick Perry, Letroy Guion and Jeff Janis remain spectators. Mike Neal apparently decided it was time to start practicing and joined the party on Wednesday, but Morgan Burnett was a fresh addition to the sideline after “tweaking” his ankle that same day. Granted, that Burnett’s injury is not serious, this could end up a positive for the Packers as it forced Ha Ha Clinton-Dix to join Micah Hyde in working with the ones.

As already noted, it is too early in camp to make any definitive judgments or to get real excited about anything you see. This especially applies to the bigs on both sides of the line. Until the defense is allowed to hit and rush the passer like in a real game, you aren’t getting the real story for either side. The same could be said for the running backs. Eddie Lacy has looked great, but the games will tell the story. In Lacy’s and possibly James Starks’ case, by games, I mean regular season games, since neither back is likely to log much time in the preseason. Nor should they.

Of the bigs, it can be said that Mike Daniels is at least as advertised in both his 1-on-1 pass rushing skills and his pledge to be a vocal leader on the defense. Twice already he has loudly chastised the defense during the 11-on-11 work when he thought the offense was having too easy a time of it.

Regarding the two most competitive position battles in camp — the safety and tight end positions, Micah Hyde has smoothly transitioned to safety and has frankly looked at times like the best safety on the team. Clinton-Dix and Sean Richardson have both had their up and down moments. At tight end, we may have a bit of a surprise already. Brandon Bostick has taken more of the first team snaps than Andrew Quarless, and it appears that if he can block at all, he has a good shot at starting. Richard Rodgers, meanwhile, has continued to shine, as he did in OTAs.

This is undoubtably Davon House’s most important training camp, and he has responded so far with his best training camp. Casey Hayward has also practiced well, and with Sam Shields, Tramon Williams, Hayward and House, the Packers appear to have the best group of corners they’ve had in recent memory.

In fact, that secondary and the wide receiver core have had a seesaw battle so far in camp. The defense appeared to get the better of it on Monday. Wednesday, the receivers made some plays. Myles White has probably been the most pleasant surprise at that position to this point. Always a fast guy, White appears stronger and has made some plays. Jared Abbrederis has been up and down with the ups coming on Wednesday. He is definitely in the mix for punt returns, and he should be. DuJuan Harris looks like the Packers new kick returner, as long as he can hang onto the football.

Brad Jones appears to have retaken his role as the lone inside linebacker in the dime, taking it back from A.J. Hawk, who filled that role last year thanks to Jones’ injury and ineptitude. Jamari Lattimore has shown some fight, and we’ve been told that he will have every opportunity to replace one of the other inside linebackers. Again, the preseason will decide that.

The Packers hope to see continued improvement while continuing to avoid serious injury. That is all it is about right now.

As long as there’s no major injury news, I think we’ll all be happy.