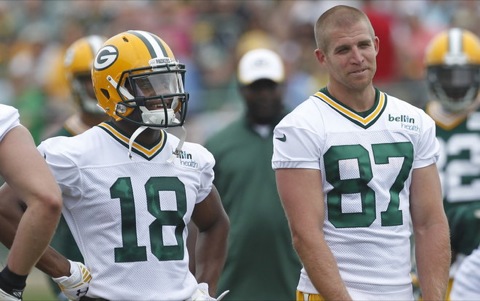 And so it begins…

The Green Bay Packers had their first training camp practice in the shadows of the Don Hutson Center yesterday. While this is reason for beers and boasting in Green Bay — not that any of us NEED a reason for either of those — it also is a somewhat ominous reminder that another fleeting summer has near run its course, and that the shorts will be back in the hope chest before too long.

It was a proper 86 degrees and humid in Green Bay on Saturday. However, the players may be relieved to know that contrary to the norm, cooler weather is expected for the first week of camp. Heat like Saturday isn’t much of an issue when practicing in shorts and shells, but the cooler weather will be very welcome for when the pads finally come on.

As usual, the first thing to note about training camp is who ISN’T practicing. It should not be a surprise that some of the defensive armageddon from last season would carry over to the start of camp, and yet, the Packers at least are in better shape injury-wise than they were last year at this time with few injuries reported from OTAs.

The long-MIA Jerel Worthy is non-surprisingly starting training camp on the sideline, but allegedly, it is his lower back and not his knee that is keeping him there. I do NOT consider that an improvement to his condition, though Mike McCarthy seemed upbeat about his status after practice.

Apparently all it took was the plane ride over for Letroy Guion to catch the hamstring bug. He too watched the first practice, and the hamstring was cited as his reason.

Those two joined Mike Neal and Nick Perry on the sideline, whose failure to pass their physical was announced the day before. Mike Neal is supposedly suffering shoulder issues, and I am quite sure that Neal has cited virtually every part of his body as bothering him at one time or another. Dude apparently has the aches and pains of a 40-year-old. Percy Harvin thinks he misses practice a lot.

Nick Perry’s foot is still bothering him, which I imagine can happen when you break it, and it’s 86 degrees and humid out. Coach McCarthy was apparently unconcerned with the status of Perry and Neal and claimed both were “close.” We will see.

This start of training camp was probably more noticeable for who WAS practicing. Derek Sherrod actually practiced. Hard to believe, but take my word for it. Kevin Dorsey, who missed all of last year’s camp, practiced as well, and even flashed some. Casey Hayward not only practiced but was the defensive standout of the day. It was only day one, but the Packers need the Casey Hayward of 2012, and for one day at least, they appeared to get him.

Andrew Quarless, who missed the OTAs, was a full go, and that’s a good thing for him since the tight end position was in full rotation mode throughout practice. It seems clear that all the talk about an open competition wasn’t just talk after all. The tight end and safety position both saw a rotation of players and appear, as advertised, the most competitive positions on the team.

The starting defense came out in the base with Julius Peppers, Datone Jones, B.J. Raji, Mike Daniels, and Clay Matthews on the line, Brad Jones and A.J. Hawk at ILB, Sam Shields and Tramon Williams outside, and Morgan Burnett and Micah Hyde at safety. There is no question the Packers got quicker and more athletic along the defensive front, no doubt in direct retaliation for playoff losses to Colin Kaepernick. However, unless some guys play much better in 2014 than they did in 2013, I still have concerns about the run defense. For this unit to be even serviceable against the run, Dom Capers is going to have to find creative ways to utilize their quickness.

As already noted, Darren Perry rotated players at safety, and thus, Sean Richardson and Ha Ha Clinton-Dix got their share of reps.

The offense spent the first half of practice inside the Hutson Center and away from prying eyes. Apparently whatever they were doing in there included hurting T.J. Lang. He had a noticeable limp when the offense finally came out to play with the defense, and Don Barclay played right guard with the ones for the remainder, giving the Packers a front line of David Bakhtiari, Josh Sitton, J.C. Tretter, Don Barclay and Bryan Bulaga. Though it was Lang’s injury that got Barclay into the starting lineup and McCarthy had good things to say about Lang afterwards, I wouldn’t be shocked if those five are your starting offensive line in week 1.

Without the pads on, it wasn’t the kind of day for any of the bigs to shine. It was a day for the skill positions, and the defense appeared to get the better of it, with Casey Hayward and Davon House both having good practices, except for the Aaron Rodgers to Jordy Nelson connection, which repeatedly beat the defense for big gains.

Eddie Lacy is clearly off to a better start than last year and appears determined to make himself a viable three-down running back. He caught a number of passes out of the backfield and looked more natural at it.

However, Jordy Nelson was the obvious star of day one. He not only practiced so well that reporters ironically tweeted that he appeared to be “playing for a contract,” but after the 7-on-7 portion concluded with a bomb to Jordy, McCarthy ended practice by announcing to the team that Nelson had been extended by the Packers.

“Everyone is excited,” McCarthy would say afterwards. Other than Nelson, who outperformed every contract he’s signed so far, I bet no one is more excited than Aaron Rodgers. He and Jordy may have made a point on Saturday. Now let’s just hope that point doesn’t have something to do with the defense.

Previous Article
Will It Really Be This Year for Brett Favre? We Shall See
Next Article
Randall Cobb Says He Hasn’t Done Enough, is Right