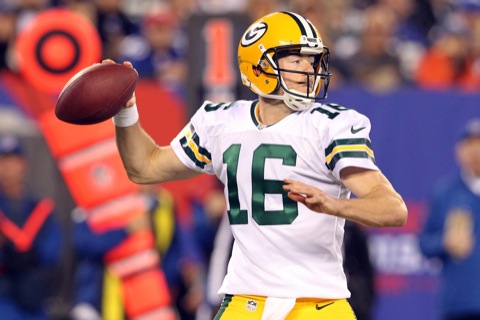 Well, we know who the Green Bay Packers starting quarterback is. Some guy named Aaron Rodgers. However, that doesn’t mean there won’t be any competition at the quarterback position during training camp.

The Packers learned a hard lesson about that last year. Aaron Rodgers went down and they were left with Seneca Wallace, and then Scott Tolzien, and then Matt Flynn…

Wallace clearly wasn’t the answer. Tolzien, who started the season on the practice squad, wasn’t ready. Flynn eventually did the job well enough, but he was cut by two teams before returning to the Packers.

Two of those guys are still around. So what’s different this year?

Probably quite a bit. Here’s a look at the competition.

Matt Flynn
If the Packers had never let Matt Flynn leave as a free agent two years ago, we probably wouldn’t be having this conversation. Of course, they weren’t going to pay him starters money like Seattle did, so we got a year of Graham Harrell and the fiasco that was the 2013 season. Flynn eventually ended up back with the Packers midway through the season and played in five games, throwing for 1,146 yards, eight touchdowns and five interceptions. More importantly, he was 2-2-1 in those games. That’s not all that impressive alone, but it is when you factor in how poorly the Packers defense was playing at the time. Flynn kept the Packers in the playoff race and proved to be the only quarterback capable of winning a game while Rodgers was out.

The Packers re-signed Flynn to a one-year contract worth a little over $1 million this offseason. Only $75,000 of that deal was guaranteed. So while Flynn has proven that he’s capable, his contract tells us he’s no lock to make the Packers roster.

That brings us to…

Scott Tolzien
Scooter! Scott Tolzien played in three games for the Packers in 2013 and did not fare well. He had 717 yards, one touchdown and five interceptions. While that sample leaves a bit to be desired, Tolzien brings some things to the table that Flynn doesn’t. Primarily, arm strength. Tolzien can make throws that Flynn can’t. The Packers obviously think highly of the guy too. When he was on the practice squad last season, the Packers gave him a raise from $6000 per week to $32,000 per week in order to ensure he stayed in Green Bay. Now, Tolzien has no more practice squad eligibility left, so it’s either going to be him or Flynn this year.

In addition to the physical tools, Tolzien also has the advantage over Flynn in that he’s younger by two years and cheaper by about $400,000. Those things alone aren’t going to win him the job though. He’ll have to outperform Flynn in the preseason. Now that he’s had a year in the system, there’s no reason to believe he can’t.

Chase Rettig
Who’s this guy? He’s an undrafted rookie from Boston College. Is he going to compete for the No. 2 job? We don’t see how. Unless he’s a total disaster, he probably ends up with a spot on the practice squad though.

Who wins?
Even though Flynn has proven on more than one occasion that he can do the job, there’s no loyalty in Green Bay. In our eyes, the Packers WANT to give the job to Tolzien. Flynn will have to establish a clear gap between himself and Tolzien to keep the job. Now that he’s more familiar with the system, Tolzien’s natural ability should take over and create the difference. Unfortunately, that means Flynn will be looking for a job elsewhere.