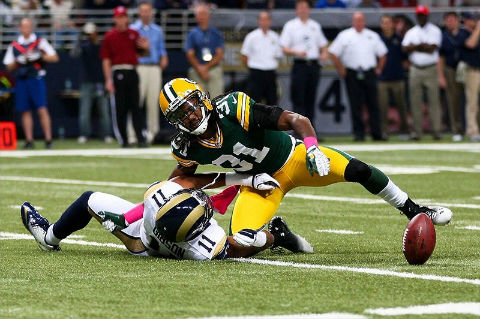 Cornerback is one of, if not the deepest position for the Green Bay Packers entering 2014. And we know who the starters are going to be — Tramon Williams and Sam Shields.

Williams was arguably the Packers best defender down the stretch of last season. It didn’t really take much to earn that title, but still, the guy made plays.

Shields is a borderline shutdown corner and now the Packers are paying him like he is a shutdown corner. They handed him a four-year, $39 million deal with $12.5 million guaranteed earlier this offseason.

Knowing that, what the hell are we even looking at the cornerback position for? Well, it’s going to be interesting to see what happens to the guys not named Williams or Shields.

The Packers have plenty of talent behind their top two and they’re going to have a tough time getting all of that talent on the field.

In fact, someone who could legitimately be a top-three cornerback on another team may just end up looking for a job with another team.

So, here’s the best of the rest

Casey Hayward
Hayward had a great rookie season in 2012, when he intercepted six passes. Then — stop me if you’ve heard this one before — he suffered a hamstring injury in 2013 and that limited him to three games. When Hayward was on the field, he wasn’t effective. Whether that was because of the injury or a sophomore slump, we’re not quite sure.

What we are sure of, is Hayward needs to prove he’s fully healthy AND that he can be effective if he’s going to return to his role as the slot cornerback. He’ll have the inside track to do so, but he’s also going to have plenty of competition.

Davon House
House should be one of the guys who pushes Hayward. He played in all 16 games in 2013, but was up and down. He ended the season with 44 tackles, a sack and a pick. House has some talent and will benefit from all the playing time he got last season, but he’s equally as likely to be on the field as he is off the team when the season starts.

That’s not necessarily a knock on him. He just seems like he’s going to have to earn it more so than any of these other guys.

Micah Hyde
So the Packers have been playing Hyde at safety this offseason. We’ll see how long that lasts. If he remains there, that’s good news for one of these other guys. After an outstanding rookie year, Hyde is certainly making the roster. The only question is where he plays and how often. In 2013, Hyde had 55 tackles, a sack and a forced fumble. He filled Hayward’s role in the slot admirably. The Packers have said they want Hyde to be a three-down player and if he isn’t starting at safety, we’re not sure how that happens.

The point is, Hyde is going to get on the field some how, some way.

Jarrett Bush
Let’s not forget about Jarrett Bush. While he’s not going to push to be the No. 3 cornerback, this guy has managed to stick around like a cockroach for a lot of years. You have to wonder how it’s even possible for him to make the roster this year. And of course, we’ve thought that in years past and here he is.

Demetri Goodson
The Packers have six cornerbacks who belong on an NFL roster, so of course they selected Goodson in the sixth round of this year’s draft. How does this guy have a shot at making the team? We have no idea, other than to say that you don’t spend a draft pick on a guy with the intention of cutting him.

So there he sits, mucking up the works. The one thing we know about Goodson is he’s an athlete. He played college football at Baylor after he played college basketball at Gonzaga. If he picks up the scheme quickly and shows on special teams, he’s got a good shot at making the 53.

Who’s left?
This isn’t really a question of winning jobs. There will be jobs won — the No. 3 cornerback, for example. It’s more a question of survival.

The Packers traditionally keep five cornerbacks on the active roster. They ended last season with six, along with two guys stashed on injured reserve.

First, we’re counting Hyde as a cornerback until he wins a starting job at safety. Second, we’ll assume the Packers will find a way to keep six of these guys this year. That still leaves one guy as the odd man out.

There’s just too much talent here to release one of them. Our bet is the Packers end up trading House. As valuable as Bush is on special teams, we just can’t see the Packers letting him go.

Goodson is borderline. If he shows nothing, then it’s easy to cut him and who cares what happens. If he shows promise, the Packers almost have to keep him on the 53. If they try to slide him through to the practice squad, another team is likely to pick him up. Then you’ve not only wasted a draft pick, but given another team a guy who can play for nothing.

But hey, two or three of these guys are sure to pull a hamstring and the make the Packers’ decision easy.

Mike McCarthy Finally Gets His Street