Who Wants to Go to the Packers Shareholder’s Meeting? 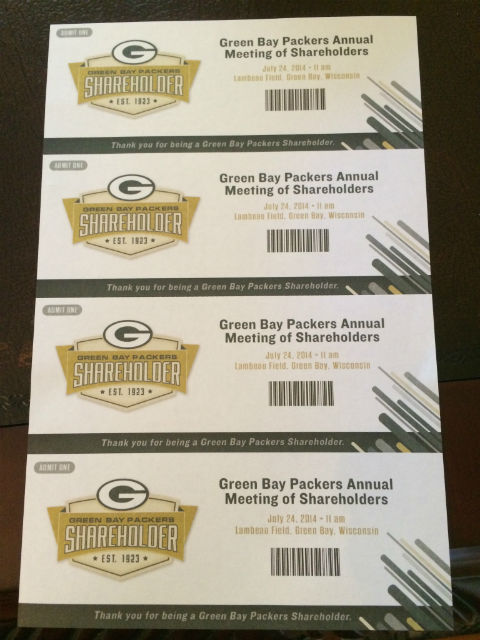 It’s almost that time of year again. Time for the annual circle jerk known as the Green Bay Packers shareholder’s meeting. And like I did last year, I’m giving my tickets away.

So you, yes YOU, can go pretend you’re a shareholder even if you’re not. Then you can say things like…

“Man, I wasted $275 on this worthless piece of stock. All I ever get out of it are these crummy tickets to the shareholder’s meeting.”

Now, I’m not going to tell you this is some great, entertaining event. It isn’t. You do get to go hang out at Lambeau though and you do get to sit in the bowl for a while. You also don’t have to pay a “nonprofit” corporation a bunch of money for “stock” that is never going to increase in value for entry.

Besides that, you get to see some of the Packers brass and while it isn’t a game, it also doesn’t cost as much as a game.

So here it is. I’ve got eight tickets. My roommate, Aaron Druckenbrod, has generously included his in this giveaway. I’m going to give them away in sets of two.

Last year, I asked the people I gave the tickets away to to make some sort of sign that said TotalPackers.com on it and take it to the event. They were supposed to send pictures.

Of course, I never heard from them again.

So much for appreciation.

At any rate, if you want a pair of tickets, give us a good reason why you should get them in the comments. And yeah, you’ll get stronger consideration if you’re willing to go along with our asinine plan of taking a sign that says TotalPackers.com on it to the event.