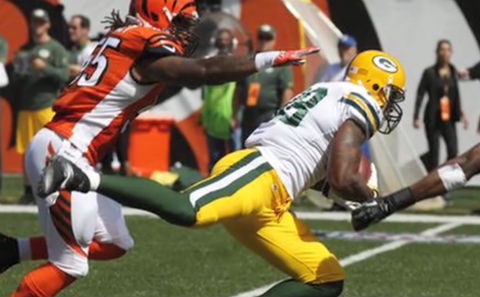 We recently looked at the potential landing spots for free agent tight end Jermichael Finley and his surgically-repaired neck. The Oakland Raiders and Pittsburgh Steelers were not among them, but it appears they should have been.

NFL.com is reporting that both teams have shown interest.

The Steelers probably know as much about Finley’s condition as any team, considering their team doctor is the guy who performed spinal fusion surgery on Finley and also deemed him medically fit to play again.

They seem relatively set at tight end with two-time Pro Bowler Heath Miller, but Finley could provide an upgrade for the aging Miller. The Steelers could also run more two tight end sets because god knows their receivers leave a lot to be desired.

The Raiders, on the other hand, have a bunch of Chachies on their roster. Check out this tight end depth chart: David Ausberry, Mychal Rivera, Nick Kasa and a bunch of other guys you’ve never heard of.

Anyway, the Raiders could clearly use a tight end… or three.

And of course their general manager is former Packers executive Reggie McKenzie, who’s seen Finley first hand. McKenzie has already signed his share of former Packers in his two years on the job — Charles Woodson, James Jones and C.J. Wilson.