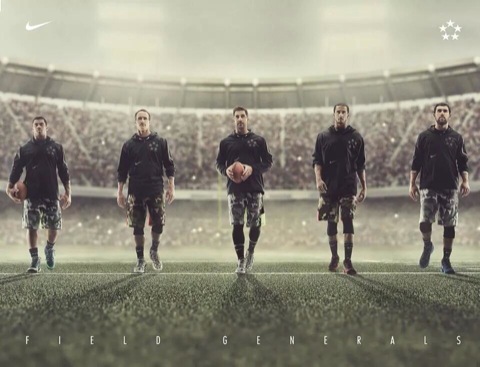 Nike has a new shoe for quarterbacks, so naturally they have a new campaign featuring quarterbacks. It’s the Nike Field Generals campaign, which is so named because the shoe is called the Field General and, you know, these quarterbacks are field generals. It’s got QB1, Aaron Rodgers, front and center.

There are some other guys too, of course. They are Wisconsin Badgers great Russell Wilson, Drew Brews, Douchey McDoucherson and Dandy Andy.

I don’t think there’s any way possible Dandy Andy cannot look awkward. He may as well be a computer programmer working in his mother’s basement and subsisting on Doritos and Mountain Dew.

Anyway, the whole thing seems to have a bit of a soccer flavor to it, but maybe I just say that because I’m watching the World Cup right now.

If I were 15, I would totally throw this poster on my wall, though.

Who Wants to Go to the Packers Shareholder’s Meeting?