Johnathan Franklin’s Career Could Be Over 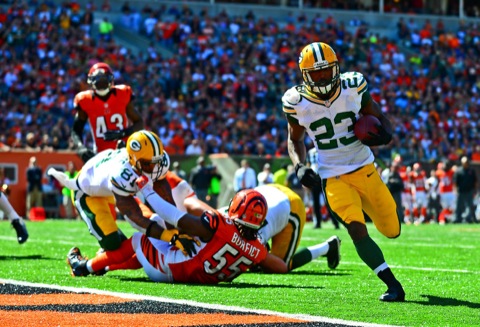 Johnathan Franklin has only part of one NFL season under his belt. It may turn out to be his first and last NFL season.

Franklin went on injured reserve following week 12 after suffering what we were told was a concussion. Well, now we’re hearing he has a neck injury. One that the Green Bay Packers think might be career-threatening.

Rob Demovsky tells us this.

According to two people with knowledge of his situation, the Packers are putting Franklin through more tests to determine whether it’s safe for him to continue playing.

If you’re a college guy, you’re probably thinking the last place you want to go play ball is in Green Bay. Either you’ll end up blowing out your hamstring 50 times or you’ll break your neck and never play again.

Seriously though, if the Packers did lose Franklin it wouldn’t really hurt. Between Easy Ed, James Starks and DuJuan Harris there aren’t many carries left over.

The loss would suck because we only briefly saw what Franklin can do. In the only game he got any real action, the fourth-round pick carried the ball 13 times for 103 yards. He only had six more carries all year long.