Who’s the Odd Man Out in the Green Bay Packers Backfield? 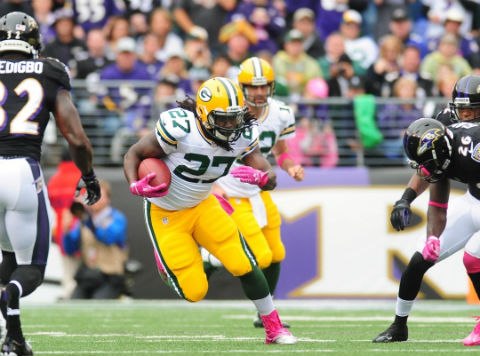 The Green Bay Packers didn’t have to make this decision last year. Unless one of their running backs suffers a season-ending injury during training camp — as DuJuan Harris did in 2013 — they will have to make it this year.

That is, who ends up being the odd man out in a backfield seemingly loaded with quality players?

Let’s assess the cast of characters.

Eddie Lacy
Easy Ed will enter the season as the clear-cut No. 1 on the depth chart, which is something the Packers didn’t have in 2013. After running for 1,178 yards and 11 touchdowns as a rookie, Lacy deserves that designation. Clearly, he’s not going anywhere. Barring injury, the only way Lacy doesn’t get the majority of the carries during the season is if he spends more time in the buffet line than the weight room.

James Starks
Starks was an unrestricted free agent this offseason. We figured, hey, he’s as good as gone. The Packers have enough quality backs without Starks. So of course they went out and gave him a two-year deal for a little over $3 million. The fact that Starks signed it when he could have possibly gotten a larger role elsewhere is as good a sign as any that the Packers told him they plan on using him frequently in 2014. After last season, there’s no reason they shouldn’t. Starks averaged a team high 5.5 yards per carry.

We’re going to assume that if healthy, Lacy and Starks are locks to make the roster. The Packers traditionally keep three running backs and a fullback on their roster. That means this next group of guys will have to fight to make the team. If the traditional total of four backs holds true to form, one of these guys will be released or get traded.

John Kuhn
Yes, we see a real possibility that the Packers could enter a season without Kuhn for the first time since 2006. The veteran has a lot working against him. He’s 31 and guys over 30 are definitely in the minority on the Packers roster. He plays a position that’s all but been eliminated. The Packers are one of the few NFL teams that still use a fullback and even they’ve been utilizing the lead blocker less and less. Like Starks, Kuhn was also a free agent this offseason. Unlike Starks, he didn’t get much of a commitment from the Packers. He took a one-year deal worth just over $1 million, which is a salary reduction. His signing bonus was only $100,000. So the Packers could part with him pretty easily. On the positive side, Kuhn provides veteran leadership and the Packers have very little of that. He’s also extremely valuable on special teams. Then there are the intangibles. You all remember that block on Julius Peppers against the Bears. Ed Lacy doesn’t make that play.

DuJuan Harris
After spending all of last season on injured reserve with a knee injury, Harris is more or less the forgotten man. However, he’s also the guy who entered training camp last year as the No. 1 back (according to Mike McCarthy), the role he earned with his performance late in 2012. So it’s pretty much back to square one for Harris. The good news for him is he’s used to having to battle for a roster spot. Harris went undrafted and was released by the NFL’s junior varsity team, the Jacksonville Jaguars, before joining the Packers. In Green Bay, he worked his way up from the practice squad to the active roster and eventually into a starting role. Unfortunately, that means nothing at this point. Harris is going to have to prove it all over again. He also has the added obstacle of proving he’s fully recovered from his injury.

Johnathan Franklin
Franklin has the undesirable distinction of being another kind of forgotten man. The kind that when game day rolls around, the coaches forget he’s available and he doesn’t get any touches. That happened numerous times in 2013. Franklin wasn’t out of sight, out of mind like Harris. He was literally in sight, but still out of mind. Then he suffered a concussion in late November and the Packers inexplicably put him on injured reserve. None of these things are good signs. Franklin does have two things going for him. In his one chance to be the featured back, Franklin ran for 103 yards against Cincinnati — one of the stronger run defenses in the league — in week three. He was also a fourth-round pick just last season. It will be tough for the Packers to give up on him after only one season, but it seems like a real possibility.