Brett Favre is Coming Back this Year 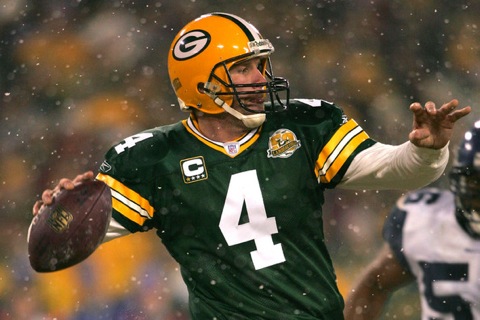 Ah, good old Brett Favre. The slinger of guns. The pied piper of dick pics. He’s like a kid out there. Just having fun.

Well, king ding-a-ling is going to be coming back to Green Bay to watch the Packers play this year, barring anything unforeseen. You probably know that the Packers, in their infinite wisdom, tried to get Favre back in town last year for a game. Favre wanted to come back, but he was coaching high school football and his team went to the state finals, so it didn’t happen.

So, get ready for some Favre!

“We have had communication,” Favre said. “Not that it’s really anybody else’s business with all due respect. I have a tremendous amount of respect for Green Bay, and it’s not about me. It’s not necessarily about them. It’s about the fans and respect. When the time is right. They’re going to have things to do. They have a season to play. They have to get ready, and I don’t want to be a distraction for them.”

The last couple times Favre came to Lambeau, he got pelted with boos. And that’s because he is/was a traitorous fuck who was playing for the Minnesota Chili Stains at the time.

Is this homecoming going to be any different? Probably.

The Packers organization obviously thinks so, but they’re more in touch with the corporate sponsors than they are the fans. Sure, they’ll take your money, but they don’t really give a crap about what you think.

We’re guessing King Brett isn’t going to get booed out of the building. We also doubt it will be an all-around love fest. This would probably be a surprise to the organization, but a lot of people remain either indifferent or resentful towards Favre.

It isn’t just because he played for the Chili Stains, either. There was a whole series of events leading up to that that don’t necessarily sit well with everyone.

Let’s totally glaze over that, though. Everyone put on their happy face and welcome Lord Brett back into the kingdom.