by Monty McMahon
in Uncategorized
57 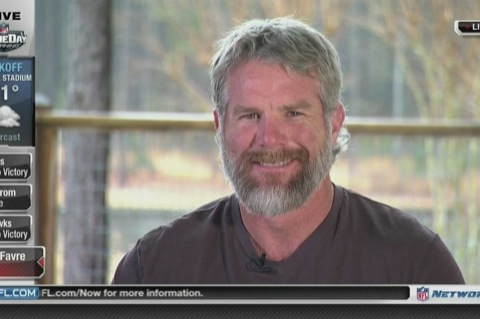 We’re all pretty certain there will be some sort of reunion between Brett Favre and the Green Bay Packers this year. Most likely, he’ll return to watch a game. This, of course, has our staunchest Favre hater, E. Wolf, beside himself. So he was more than happy to hear that old Dick Pic is reluctant to come back because he’s afraid of getting booed. The following is straight from the keyboard of E. Wolf, the most vocal anti-Brett Favre individual in all the land.

On his Sunday morning radio show, Mark Chmura confided that, according to an inside source, “Brett [Favre] was confirmed” to make an appearance at Lambeau Field last year, for a game “late in the year,” but had to cancel at the very last minute. Far more importantly, this same source claims that, “He is very afraid of getting booed at Lambeau.” (emphasis added). Chmura further added that “that is why he is reluctant to come up.” Chmura further clarified that this first visit would simply be to watch a game in the press box. But even that was too dicey of a proposition.

From this author’s perspective, this is most excellent news indeed. Alas, it is probably inevitable now that the former Packer will return to Lambeau this year, probably for a number retirement ceremony. Ideally, such a proposition should not be considered except on a posthumous basis, after the traitor is dead and buried in the cold gray ground. Such is the just reward for an ex-Packer ending a hall-of-fame career as a Viking, for doing everything in his power to render the Minnesota Vikings, our most hated rival, Super Bowl Champions, which in turn threatened to derail and sabotage the McCarthy-Rodgers era just as it was on the cusp of claiming a Super Bowl championship. This man, once inextricably linked to the Green and Gold, turned against that sacred oval G symbol, and came very close to shattering it.

At this point however, the author has resigned himself to the fact that such just desserts will not be possible, and that he will probably return this year for a number retirement ceremony. As disappointing as that is, it is heart-warming that even the man in question knows that there are many, many Packer fans who refuse to be so forgiving: fans who have backbone and refuse to turn the other cheek to someone who very nearly brought our most hated rival their first Lombardi Trophy and plunge our proud organization into even greater depths of chaos and dissension from which it could not possibly ever recover.

Perhaps his conscience pangs him, perhaps he realizes deep down that what he did was wrong, even if he still has not exactly apologized for his sins with any sincerity. At the very least, he is not so oblivious as Mark Murphy is to think that this will not go down without some controversy and dissension.

That the man himself recognizes this danger makes the author smile. It demonstrates that, despite the reputation of being too friendly, too welcoming to visiting fans, even fans of hated rivals like the Minnesota Vikings, perhaps Packers fans are not all chocolate and sunshine after all, particularly to those who do us wrong. Let us hope that the legions of Packers fans who never wavered or faltered from our Green and Gold colors refuse to be so forgiving: those Packers fans who always brandished that sacred, illustrious oval G symbol, even in the darkest hour as turncoats in our midst dared to brandish enemy colors in those desperate days when utter doom seemed imminent. Let us hope that his worst fears come to fruition, that these stalwart, unwavering legions make themselves known on any day he returns, by booing or jeering, with posters and banners denouncing this man and this ultimate betrayal that he so heinously perpetrated. Perhaps he will be serenaded with unrelenting, deafening cheers “Ber-ty Ju-das” to the tune of that old “1918”chant Yankees fans used against the Red Sox.

Unfortunately, it will only be a small dose, only a small taste of tit for tat. But it will humiliate and embarrass the arrogant jerk who thought himself larger than the Green Bay Packers. And thereby, it might actually make him sincerely regret his treasonous lechery. It might make him regret coming back at all. Indeed, perhaps just maybe, it will dissuade him from ever coming back at all. Most excellent news, indeed.