Aaron Rodgers Wants a Sit Down with Starr, Favre 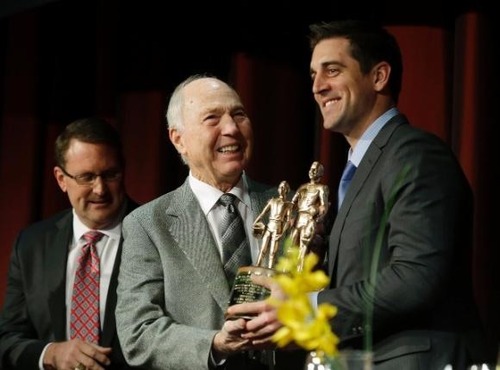 Not like a mafia sit down or anything. There’s no beef to work out. Quite the opposite in fact.

Rodgers’ proposal would be some sort of love fest for the fans, where the three quarterbacks would talk about tossing the old pigskin around for the Pack.

“I’ve always thought it would be fun to do something, the three of us, some sort of sit down where we could all talk about our experiences,” Rodgers said. “I’m sure that’s three interesting perspectives on this place and the appreciation for it. But Bart’s been a great mentor and a great guy. It was a blast to win his award, and I think Brett’s ready to be welcomed back the way he deserves to be welcomed back, and that will be exciting.”

The vagaries there at the end of Rodgers’ statement is the Bart Starr Award, which Rodgers collected the week of the Super Bowl. Each year, Starr give it to a player who is a do gooder in the community.

Then there’s the inevitable Favre return, where everyone will undoubtedly shower old Lord Favre with praise and admiration. Because he deserves nothing but, gosh darn it.

So maybe after the Return of Favre, we can all get together for this sit down.

I’ll tell you what would be great. It would be great if they put these three guys on stage during the shareholder’s meeting. Less Big Ted saying absolutely nothing and Ginger Gap Tooth patting himself on the back and more stories about football by dudes who played football!

You know, then it would be like our stock wasn’t completely worthless and a total waste of money.

Of course, we’re pretty sure if the Packers would put on an event like this, they’d charge you for it. If there’s money to be made off of you, you can bet your ass the organization will find a way to suck every last dime out of your pocket.