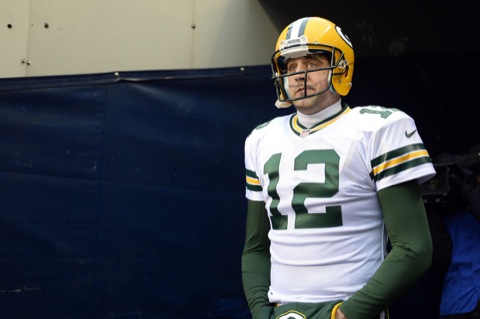 Well, this is interesting. Green Bay Packers quarterback Aaron Rodgers says he often felt like his squad was the junior varsity squad when they walked on the field.

Rodgers made the comment when speaking about the bulk the Packers have added the past couple offseasons, apparently in an effort to, you know, get bigger.

“I think we’re a bigger, more physically intimidating team,” Rodgers said. “We haven’t had the kind of physical talent as far as size here in a while. I think there’s been times — I think back to playing Jacksonville in ’08 in Jacksonville [a 20-16 Packers’ loss], some of the battles we’ve had with our division teams at times — where you walk on the field and feel like you’re kind of a JV team.”

“We’ve still won a lot of games looking like that, but it’s fun when you walk around the locker room and you’ve got guys like [Julius] Peppers, [Adrian] Hubbard, Datone Jones and then with Derek [Sherrod] back with his size, adding size at receiver, tight end with Richard Rodgers. We just haven’t had guys in some of these positions with those body types, and that’s exciting.”

Rodgers named a number of offensive guys there, but obviously the defense is primarily where the team has looked to change things up.

That will happen when your defense consistently gets pushed (or run) around in the playoffs.

Defensive lineman Mike Daniels made similar comments last week, saying he’s tired of the defense getting punched in the mouth.

So everyone around the team obviously thinks the defense is going to be bigger, stronger and nastier this year.

We’ll reserve judgment until we see the product on the field.

Aaron Rodgers Wants a Sit Down with Starr, Favre