So What’s Up with Carl Bradford? 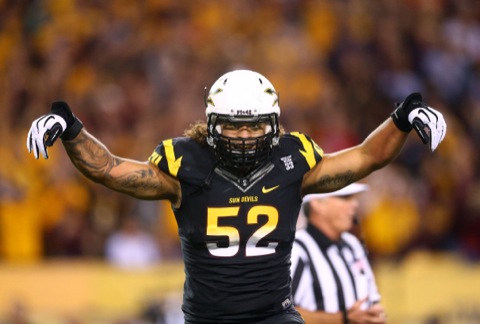 Of all of the Green Bay Packers 2014 draft picks, linebacker Carl Bradford is the most intriguing, at least to us.

The Packers grabbed Bradford in the fourth round and frankly, there are all kinds of questions about him.

At 6-1, 240, one of the knocks on him is that he’s too small. His arms (30 1/2) are apparently too short too. And then there’s the question of whether he’s capable of operating from a two-point stance or covering anybody.

What we do know is this. Bradford isn’t going to be playing any defensive end in the NFL.

The real question is whether he’ll be playing outside or inside linebacker.

A lot of scouts have suggested that Bradford is better suited for the latter and the thought of an inside linebacker with Bradford’s explosiveness absolutely makes us drool.

When the Packers drafted him, we were giddy because it felt as if we were one step closer to our life-long dream of a Packers defense without A.J. Hawk at inside linebacker.

Well, unfortunately, there’s been no indication from the Packers that they plan to move Bradford inside. It appears they’re going to try him at outside linebacker and see what happens.

That doesn’t mean they won’t make a move later on. Consider both Brad Jones (6-3, 242) and Jamari Lattimore (6-2, 230) started their careers on the outside only to be moved inside.

Bradford’s size would suggest he’s better suited to the inside.

Clay Matthews is the Packers smallest outside linebacker and he’s 255. Nick Perry comes in at 265 and Mike Neal weighs a hefty 285.

So if Bradford is going to play the outside, he’s going to have to bulk up. Of course, the sooner the Packers make the logical choice and move him inside, the sooner he can take Hawk’s job.