Watch the Tools in Minneapolis React to Getting Super Bowl LII 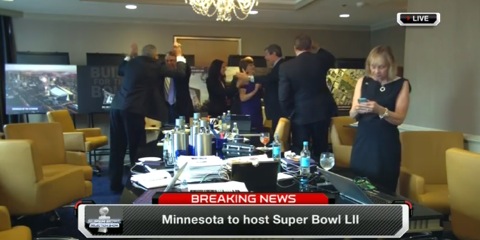 They had the Minnesota “war room” and the one in New Orleans on the screen at the same time. Kind of like when they show all the nominees on the screen at the Oscars before they announce who wins. Then we can briefly see all the losers express their disappointment, while the winner fakes surprise.

And let’s face it, this is just like the Oscars. And it’s the only thing Minnesota will ever win, so NFL Network was right to give them their one and only moment in the sun ever.

What’s that saying about the sun and a dog’s ass?

Anyway, as you might expect, there were just a bunch of white, rich, old farts sitting around in these rooms (minus a token black guy or two). People who don’t know how to celebrate.

But celebrate they did.

Like a bunch of fools. Fools who, despite being on this earth for 80-odd years, still haven’t learned how to high five.

By the way, here was their pitch video.