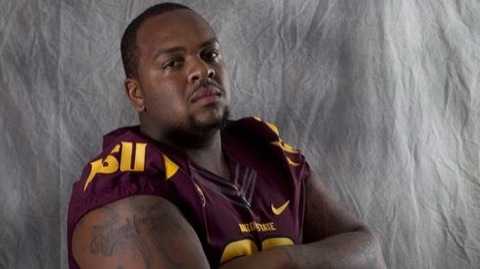 The Green Bay Packers have always done pretty well with undrafted free agents. In a typical year, two or three undrafted guys end up sticking with the team.

During the final rounds of the draft yesterday, one of the NFL Network’s talking heads noted that this draft being deeper than most, a lot of undrafted guys would have been sixth or seventh-round picks in most years.

So this group of undrafted free agents is probably one you should watch a little closer than most.

Mike Pennel, defensive tackle, Colorado State-Pueblo (6-4, 332)
2013: 36 tackles, 3 sacks, 3 forced fumbles. Well, this guy has had some problems. He was suspended twice while at Arizona State in 2012. Then he ended up Pueblo. This is probably the most intriguing prospect of the bunch because not many guys are 6-4 and upwards of 330 pounds. You’re not going to move this guy. The knock is he doesn’t get off blocks or split double teams effectively.

Adrian Hubbard, outside linebacker, Alabama (6-6, 252)
2013: 33 tackles, 3 sacks. Hubbard was actually more impressive as a junior, when he had 7 sacks and 3 forced fumbles. He has some upside in that he’s still developing as a pass rusher. He has the size and strength and is solid against the run. He doesn’t have the speed though and as you can see by his stats, doesn’t always show up. Great potential if he’s coached up.

LaDarius Perkins, running back, Mississippi State (5-10, 195)
2013: 542 yards, 2 TDs. Not terribly impressive stats, but Perkins is a good blocker and receiver. Perkins is what you would call an all-purpose, change-of-pace back. That makes him intriguing because there aren’t a lot of those guys in the league anymore. Could be a better pro than he was in college.

Joe Thomas, inside linebacker, South Carolina State (6-0, 227)
2013: 116 tackles, 20 for loss, 7.5 sacks, 1 INT. Thomas was the MEAC defensive player of the year and it appears he was one of the guys the Packers coveted most among the undrafted. That being said, there’s not much information available about him. He’s still probably better than Brad Jones though.

John Fullington, guard, Washington State (6-5, 300)
Fullington started at both tackle positions and at guard for Wazzou. So obviously that’s what the Packers like. He isn’t a great athlete or the strongest guy and he played in a spread offense, but he has decent agility.

Chase Rettig, quarterback, Boston College (6-3, 206)
2013: 1,995 yards, 17 TDs, 8 INTs. Rettig was a four-year starter, but played for five offensive coordinators for a pretty bad team during those four years. He’s got a decent arm and is noted for his toughness, but not particularly quick.

Jayrone Elliot, outside linebacker, Toledo (6-3, 240)
2013: 70 tackles, 14 for loss, 9 sacks, 5 forced fumbles. Nothing really jumps out about Elliot, but that’s why he didn’t get drafted. Although his measurables aren’t off the charts, he’s demonstrated that he can get after the passer and will create turnovers.

Jordan McCray, guard, Central Florida (6-3, 310)
Has started at both left and right guard. Spent all of 2013 at left guard. He’s strong and physical, but not terribly agile.

Carlos Gray, defensive tackle, NC State (6-3, 296)
2013: 23 tackles, 2.5 sacks. This guy entered the draft early for some reason or another. He was a two-year backup for the Wolfpack. That’s right. Never a full-time starter and he declared for the draft.

Justin Perillo, tight end, Maine (6-4, 250)
2013: 39 catches, 480 yards, 4 TDs. There could probably not be any less information available on this guy. But hey, he went to the same school as Packers great Jerron McMillian, so there’s that!

Denico Autry, defensive end, Mississippi State (6-5, 273)
2013: 31 tackles, 6.5 for loss, 2 sacks, 1 forced fumble. Autry had a better junior season, registering 42 tackles, 9.5 for loss, 4 sacks and 2 forced fumbles. You’ve got yourself a tweener here. We’re guessing the Packers will look at him at outside linebacker. He’s strong with a good motor, but not particularly quick.