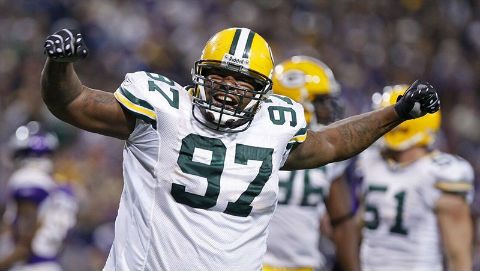 Well, what a bunch of assholes. Coach Mike McCarthy paid lip service to the team possibly re-signing defensive lineman Johnny Jolly earlier this week, but it looks like someone has made the decision that that isn’t happening.

Jolly no longer has a locker in the Green Bay Packers locker room.

Now you might say, big deal, he’s not on the team at the moment. Well, neither is Jermichael Finley and he still has a locker.

The Packers were supposedly in wait-and-see mode with both Jolly and Finley. Both had neck injuries last season, although Jolly’s wasn’t nearly as severe as Finley’s.

Finley hasn’t been cleared medically, but the Packers seem content to wait to see if he does get clearance.

Ryan Pickett is in the same boat — no locker. That was expected, however. No one has been talking about how we’d really like Ryan Pickett back this offseason.

At any rate, you know we love Johnny Jolly. He was the heart and soul of an otherwise soulless Packers defense last season.

Why the Packers wouldn’t want to give him a chance to make the roster again is beyond us. They have SO MANY great defensive linemen…