Colt Lyerla is Now a Member of the Packers 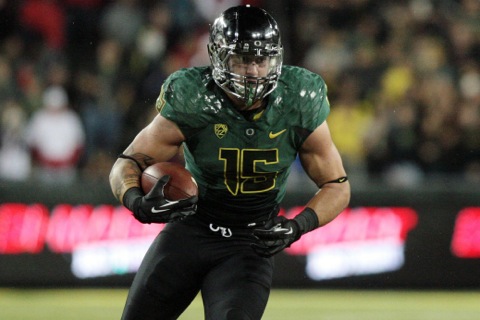 The Green Bay Packers are serious about this Colt Lyerla experiment. They’ve gone and signed the, uh… troubled tight end to an actual contract after giving him a tryout at this past weekend’s rookie camp.

Lyerla had the talent to maybe be a third-round pick, but no NFL team even wanted to sign him as an undrafted free agent. At Oregon he had several issues, the largest of which was pleading guilty to cocaine possession.

That right there will sour pretty much the entire NFL on you. Unless of course you’re an otherworldly talent like Lawrence Taylor.

Lyerla obviously showed the Packers he can do something on the field during his tryout. And they clearly think he’s adjusted his attitude or he wouldn’t have gotten a contract.

At the combine, Lyerla expressed remorse for his decision-making. Then he went and ran a 4.61 40, which was third among tight ends. He also had the top vertical and broad jumps among the group.

So in comes old Second Chance Ted to give the kid a shot.

Lyerla’s chances of making the final roster are still slim, but he’s got some tools and will be fun to watch. It sure would be interesting if he ends up outplaying Richard Rodgers, the tight end the Packers drafted in the third round.