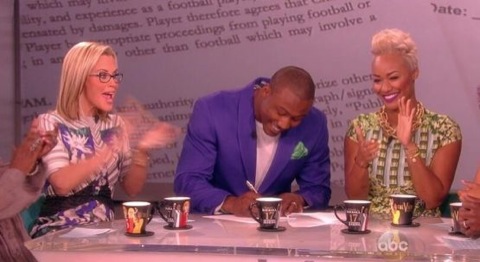 Yeah, that’s one of those shows that your wife watches while she’s home cleaning your house, doing your laundry and preparing your meals during the day.

A chick show. A chick with no job show, to be more specific.

And you know broads with no jobs love them some Brandon Marshall!

So obviously, this was perfect.

Look at Brandon there in his fancy purple blazer. Just one of the girls!

Oh, the Bears gave him three more years and $30 million. Of that, $23 million is guaranteed. That is in addition to the $10 million he was already scheduled to make this season.

Unlike most Bears, who are scumbags, Marshall actually turned around and did something good with that money. He pledged $1 million to the mental health community.

And that was on full display today.