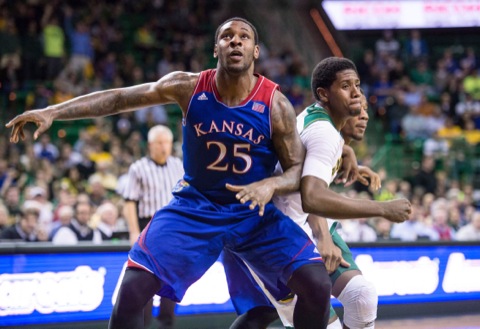 Normally, we’d brush something like this aside as a joke. That is, Aaron Rodgers reportedly “scouting” Tarik Black. However, Rodgers seems genuinely interested in Black getting a shot with the Green Bay Packers.

It’s odd not only because Rodgers has taken an interest in Black, but because Black isn’t a football player. He’s a forward for the Kansas Jayhawks basketball team. He’s also never played organized football.

While that makes him a long shot to end up in the NFL, Rodgers actually threw some balls to Black while he was in Lawrence. Apparently, he liked what he saw.

“One of the guys in our media department said, ‘Aaron Rodgers likes you. Likes you a lot,'” Black said.

He went on to say Rodgers has asked him to try out for the Packers. The kid is 6-9, 260 and would be projected as a tight end if he made the NFL transition.

Now, let’s not jump to the conclusion that someone is going to draft Black in hopes of turning him into the next Antonio Gates. It looks like he is going to at least get an NFL tryout though. Three teams have contacted his agent to express interest.

If the Packers want him, they’d seem to have the inside track. Black is a Packers fan and he already has Rodgers’ seal of approval.