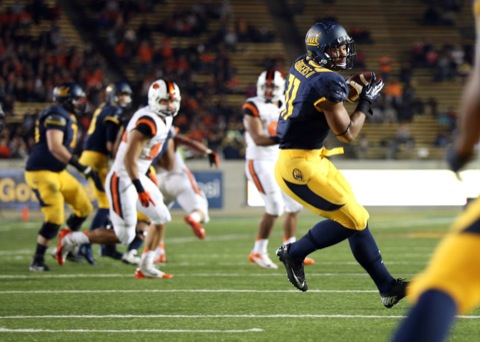 Rodgers is actually an interesting prospect. He played at 275 in Jeff Tedford’s offense. Then Tedford got fired. So last year he slimmed down to the 250s and played some receiver. He caught 39 balls for 608 yards and a touchdown in 2013.

Rodgers is 6-4 and if he gets back up to that 275 range, he’s a damn big target running down the middle of the field for that other Rodgers guy.

Obviously, a guy who’s going to need to develop, which makes this pick remind me a lot of the time Big Ted picked a guy named Jermichael.

CBS Sports had him pegged as a sixth-round pick though. Here’s what they had to say.

Rodgers was under-utilized in Sonny Dykes’ offense and offers intriguing upside. While he lacks experience and needs some development, Rodgers could surprise with his production in a Joker or H-back role after earning a mid- or late-round selection.

Here are a couple highlights to wet your whistle.