by Shawn
in Uncategorized
32 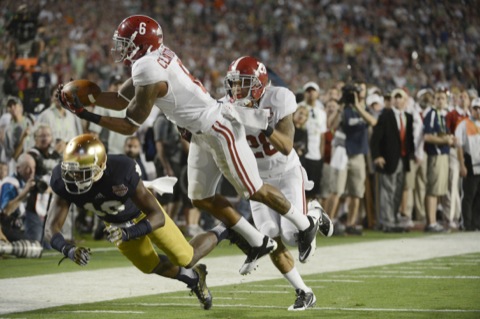 Whether the Packers were drafting best player available or for need, the stars were aligned in round one of this year’s draft.

The wily Ted Thompson did nothing to surprise us. For once, he actually took the guy that nine out of 10 draft gurus would have predicted the Green Bay Packers would take with the draft board as it was when they were on the clock.

As it turned out, the best available player happened to be at the position where the Packers have the most need.

Ha Ha Clinton-Dix was supposed to be gone, likely to the Rams, Ravens or Bears, but the Rams couldn’t pass when Aaron Donald fell further down the board than anyone anticipated. The Ravens stole the Packers other hopeful in C.J. Mosley instead, and the Bears decided to draft a corner to replace Charles Tillman first. The Jets surprisingly took a safety, but preferred the big hitter in Calvin Pryor to the centerfielder-type in Clinton-Dix.

And thus, Dix was there for the taking. Ted Thompson pulled the trigger, and just like that, the Packers got the top-rated free safety in the draft, exactly the player they needed.

Let’s hope that this is another great player taken at the No. 21 spot. If he is, then the Packers have instantly upgraded the middle of their defense. And if I am Morgan Burnett, I’m sweating that Micah Hyde might be taking my job.

Clinton-Dix is 6’1″ and 210 pounds. He runs a 4.58, which is good but not great. This is what draft guru Mike Mayock has to say about Dix: “Of all the safeties in draft, this guy had the best range. He plays faster than his NFL Scouting Combine 40-yard dash time (4.58 seconds). He misses surprisingly few tackles, and as a centerfielder he’s a natural. For a big guy, his movement skills are very natural.”

Oh, and by the way, Clinton-Dix played for the 2012 Alabama team that won the title, the same team that Eddie Lacy played for. Not a bad idea to dip back into that well.

As long as Clinton-Dix can avoid the first-round injury flu, Thompson should have accomplished with him what we hope out of a first round pick — a player who can come in and start immediately.

Here is some video of the Packers first round pick Ha Ha Clinton-Dix to send you merrily on your way.

Green Bay is All Over the NFL Draft