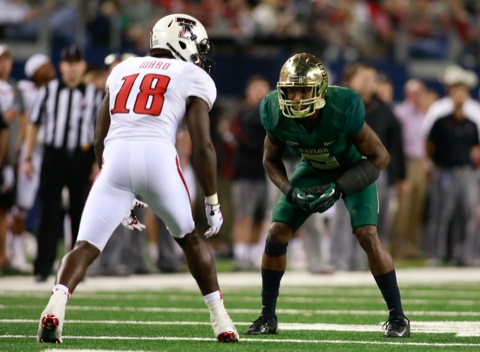 This is a curious pick, considering cornerback is arguably the strongest positional group on the team. The Packers were obviously looking for some value and maybe they’ll get it from Goodson… a couple years from now.

He started off playing college basketball for Gonzaga. Then he ended up playing football at Baylor, where he never made it through a full season. He came the closest in 2o13, playing 11 games, starting 10 and recording three picks.

Goodson has the athletic traits and body type you want, but is obviously a developmental prospect and one that’s injury-prone at that.

You have to think he’ll have an uphill battle making the final roster, when you consider cornerbacks named Williams, Shields, Hayward and Hyde are virtually guaranteed roster spots. Goodson would have to beat out either Davon House or Jarrett Bush to make the 53.

The Packers might already be thinking about stashing Goodson on the practice squad. Then maybe they bring him up next year if they let Williams walk as a free agent. That is, if another team doesn’t pick him up.

Anyway, here’s what NFL.com had to say.

An injury prone hoopster-turned-cornerback, Goodson is a height-weight-speed prospect who shows in flashes when he’s able to rely on his reactionary skills and natural athleticism to break up throws. However, he is overaged and relatively raw.

There’s not much football footage on Goodson, but here he is beating Western Kentucky in the NCAA Tournament.