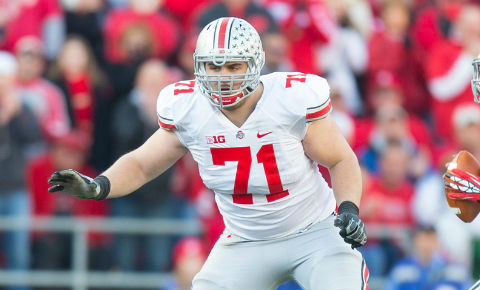 Linsley is 6-3, 296 and was a first-team All Big Ten selection in 2013. And wouldn’t you know it? He’s played multiple positions, which is a prerequisite for any and every offensive lineman the Packers add.

Linsley moved to center full time prior to his junior season. Before that, he played multiple positions as a reserve. We’re going to assume the Packers will try him at center and keep him there barring injuries.

So, let’s get down to how this guy might fit in. Last year’s starting center, Evan Dietrich-Smith, is gone to Tampa. Linsley is now the only true center on the roster. That doesn’t guarantee him a starting spot though. The Packers drafted tackle/guard J.C. Tretter in the fourth round last year thinking he’d be the team’s center of the future. Of course, he broke himself the very second he stepped on the field, so no one really knows what Tretter can provide.

It looks like Linsley and Tretter will battle it out in training camp.

At this point, our money is on Tretter simply because Ted Thompson can’t choose a guy that can contribute in the fifth round to save his life. Seriously, of Ted’s 14 fifth-round picks, only three are still on the roster and two of those guys were picked last year.

Anyway, here’s what NFL.com has to say about Linsley (who we will surely start calling Lindsey if he sucks).

Strong-bodied, heavy-handed, short-area mauler who anchored one of the nation’s most physical, productive rushing attacks. Has athletic limitations, but compensates with strength, smarts and competitiveness. Has the makeup to overachieve, and could increase his value by proving versatile enough to back up at guard.