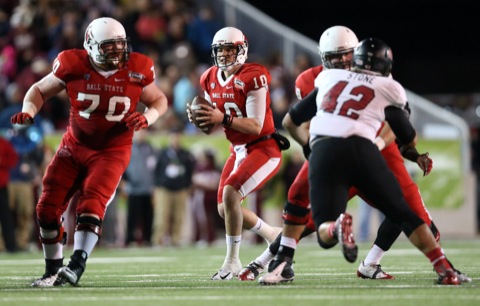 The Green Bay Packers have paid their due lip service to the possibility of adding a quarterback through the draft. And they continue to kick the tires on draft-eligible guys. Ball State quarterback Keith Wenning will be the latest prospect to visit the Packers.

Great visit in Minnesota, next up Green Bay! ✈️

Of course, like everyone else the Packers have brought in for pre-draft visits, Wenning is projected as a late-round pick or potential undrafted free agent signing.

So, you could say Ted Thompson looks more interested in adding an extra body at the quarterback position than he is at actually acquiring someone who could, you know, serve as an actual NFL backup.

Or maybe if we develop this guy for three years he’ll turn into that guy! Like Graham Harrell!

Anyway, Wenning (6-3, 218) actually has a fairly impressive resume. He was a four-year starter at Ball State and in 2013 became the first guy in school history to throw for more than 4,000 yards. Wenning threw for 4,148 yards, 35 TDs and just seven INTs.

He did this working almost exclusively out of the shotgun, though.

That’s one reason he isn’t expected to be anything more than a seventh-round pick. Also, he’s considered pretty unathletic and lacks arm strength.

But they said the same thing about Matt Flynn!