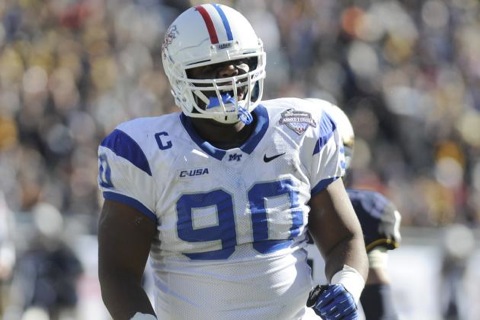 The Green Bay Packers will have Middle Tennessee State defensive tackle Jimmy Staten in for a pre-draft visit, according to Aaron Wilson.

Staten fits the mold for the Packers’ pre-draft visits. Small-school, under-the-radar prospect. There isn’t much buzz surrounding Staten, so we’re going to go ahead and assume that he also fits into that mold as a late-round pick or potential undrafted free agent signee.

Unlike some of the other guys the Packers have had it, Staten looks to be generating interest from some other teams. He’s already visited the Chargers and Patriots and also has a trip to Kansas City planned.

You can’t teach fat, my friends.

Well, maybe you can. You can tell someone to eat a lot of McDonalds and not to work out. But I digress.

The point here is, Staten is a big body and he’s good enough at taking up space.

Staten had 30 tackles in 2013. He didn’t have much else though. No sacks, for example, so he’s not really a guy who’s going to disrupt the pocket.

Big upside though, we’re sure…