Just Because: Here’s Martin Maldonado Blasting a Guy in the Face 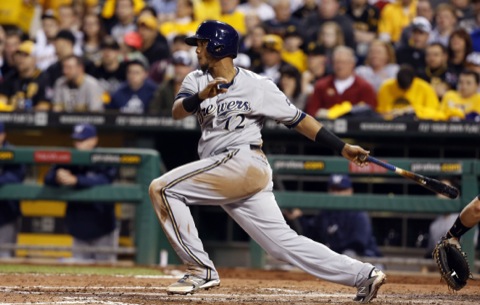 There’s jack shit going on with the Green Bay Packers today. The local hacks are reporting that the schedule will be out this week. Yeah, we told you that last week. Let’s rehash it!

No, we’re not going to do that. And we’re probably going to take the rest of the day off of trying to make up stories about the Packers when there are none, for that matter.

But this if fun, so we thought we’d bring it to you instead.

The Milwaukee Brewers played the Pittsburgh Pirates yesterday, winning 3-2 in 14. Hell of a game. I’m really starting to enjoy idiot fans booing Ryan Braun every time he comes to the plate, especially when he jacks a solo shot in the 9th to tie the game, like he did yesterday.

Anyway, the Crew and the Pirates got into a little brouhaha in the third inning of that contest. Carlos Gomez, swinging for the fences as always, hit a shot. He apparently thought it was a homer and flipped his bat. Well, it wasn’t, but he turned it into a triple anyway because Carlos Gomez.

Whatever jerkoff was pitching for the Pirates didn’t like Gomez’s bat flip, started jawing and the benches cleared. Because baseball has stupid unwritten rules.

We didn’t actually see this because we were listening to the sweet sounds of Bob Uecker on the MLB app. However, we saw it today and it’s glorious.

Brewers’ backup catcher Martin Maldonado was involved in the fray and he absolutely jacked a motherfucker.

After, he explained that he was just defending Gomez, who he said was being held down by two guys. We can’t really tell if that was the case or not, but somebody got his regardless.