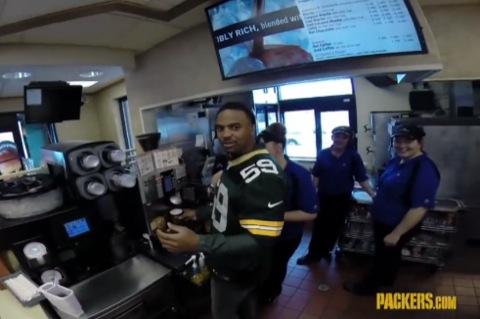 Oh… this is gold, Jerry! Gold! The Green Bay Packers are on their Tailgate Tour. They made a stop in Ashland yesterday, where the current and former players went into a local McDonalds and a Subway and started taking orders and whatnot. Among them, were linebacker Brad Jones and kicker Mason Crosby, who took over behind the counter at McDonalds.

Ironic, since that’s where both of them should be working.

Did you know that one was coming? Did I telegraph it too much?

Alright, Crosby shouldn’t be working at McDonalds after his bounce-back 2013 season, but he looked a lot like a guy who should be slinging burgers after that 2012 debacle.

Now Jones, on the other hand, well… he better get comfortable wearing shirts that have a little, yellow M embroidered on the breast.

After getting a new contract last offseason, Jones went out and dropped a giant deuce right there on the field.

If the Packers can draft a capable inside linebacker next month, Jones may well be looking for a new job. Good thing he can add this experience to his resume.

Previous Article
Quarterback Keith Wenning is Visiting
Next Article
Hey, the Packers are in the NBA Playoffs