Sam Shields Did Break the Bank… with the Packers 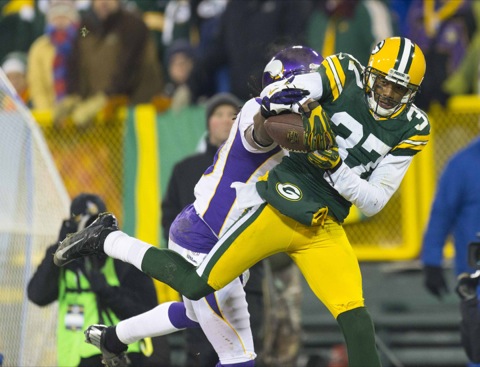 The Green Bay Packers did what was pretty much unthinkable earlier this week. They threw a boatload of money at cornerback Sam Shields and Shields took it.

That’s super for Shields and the future of the Packers’ salary cap. Obviously the deal is front-loaded, so the Packers won’t be hamstrung by the contact in future seasons.

That being said, it also sucks up nearly half of the the team’s available salary cap space this season. And guess what that means. The Packers probably won’t be participating in free agency after all.

If the numbers are correct, the Packers will have approximately $18 million left to spend. Some of that will go to their own free agents and some will go to their draft class. Some of it will also likely go toward extensions for Jordy Nelson and Randall Cobb.

And then what’s left? Not much.

Let’s get back to Shields though. The Packers wanted to pay him in the neighborhood of $5.5 million per season. Shields, obviously, wanted a hell of a lot more.

He broke off negotiations with the Packers nearly a week ago and told everyone he’d be testing the market.

That gave Shields all the leverage and it looked like he was as good as gone. This contract — at $9.75 million annually — ties Shields for the third-highest salary at his position. He trails only Tampa’s Darrelle Revis and Dallas’ Brandon Carr.

Good for Sam Shields and good for the Packers for being able to keep their No. 1 free agent, even if the numbers are a little eye-popping.