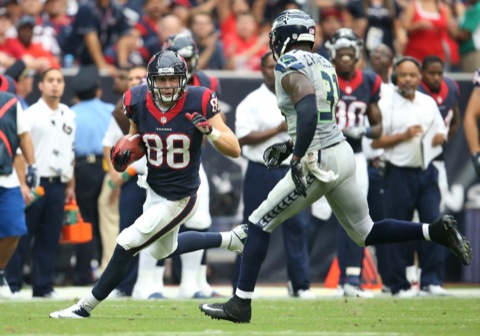 Graham is scheduled to be a free agent, unless the Texans re-sign him before March 11.

Rapoport was told that the Packers have their sights set on Graham, according to a source informed of the player’s market. Green Bay’s decision-makers have been high on the tight end since he came out of Wisconsin in 2010 and believe that Graham fits their scheme.

First, we know the Texans want to re-sign Graham, so there’s a decent chance he doesn’t make it to free agency. If he does, Graham fits the mold of what the Packers look for.

He’s still relatively young (27), he’s not going to be terribly expensive to sign and he’s decent in the passing game. In 2013, Graham started 11 games and caught 49 balls for 545 yards and five touchdowns.

Packers coach Mike McCarthy has gone on record as saying he’d like to have his own free agent tight end, Jermichael Finley, back. The potential problem there is going to be money.

Finley will reportedly be in demand on the free agent market. He’s going to enter free agency as the No. 1 available tight end because the Saints slapped the franchise tag on Jimmy Graham and the Ravens re-signed Dennis Pitta.

The greater the demand for Finley’s services, the smaller the chance the Packers will be able to (or even try to) re-sign him.

The Packers could do a lot worse than making Graham Finley’s replacement.