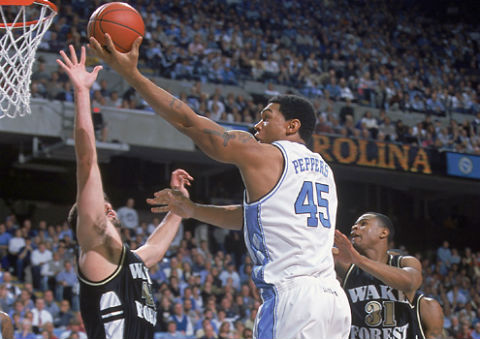 We bring this up because it’s March Madness o’clock. It’s not quite fantasy football draft day or opening day at Lambeau, but it’s way better than Christmas, New Years or Passover. This reminded us that the newest member of the Green Bay Packers, Julius Peppers, once played college basketball.

He was no schlub either. Peppers went to North Carolina and you have to be pretty decent to get on the floor for the baby blues. Peppers wasn’t an All American in basketball or anything and he did double duty for just two seasons. In the 2000-01 season, he averaged 7.1 points and 4 rebounds while playing 17.6 minutes per game.

You could see his freakish athleticism on display pretty often though.

Interestingly, that pass came from guard Ronald Curry, who was also the quarterback of the football team.