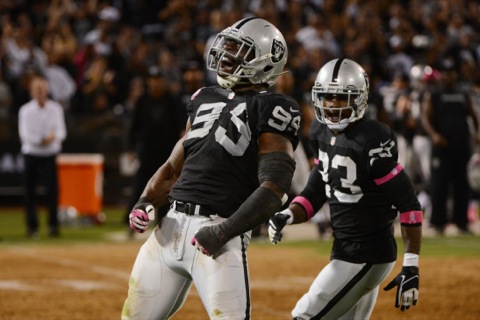 The Green Bay Packers are looking long and hard at a couple free agent defensive ends, according to reports. They are the Oakland Raiders Lamarr Houston and the Baltimore Ravens Arthur Jones.

Ian Rapoport says the Packers are interested in Houston.

Yes, they are among those interested. How much? We’ll see RT @VJ_Ostrowski: @RapSheet Any real legs to this Lamarr Houston/Packers rumor?

Aaron Wilson has the Packers kicking the tires on Jones.

Green Bay Packers also interested in Arthur Jones, according to a source

So what are we talking about with these two guys you’ve probably never heard of? Value! Upside! And other things like that.

Houston, a former second-round pick and a four-year starter, is 6-3, 300 pounds and just 26 years old. In 2013, he had 69 tackles, six sacks and two forced fumbles. That Raiders reportedly considered slapping the franchise tag on Houston, but ultimately decided against it.

Houston isn’t really worth franchise tag money — the tender was set at just over $13 million for defensive ends. That doesn’t mean he’s going to come cheap, however. The Raiders and their $69 million in cap room will most certainly make an effort to keep Houston.

He’s also going to be the cheaper of the two.

The Packers’ interest in these guys shows they’re serious about revamping the defensive line. Houston would be the bigger catch, of course, but there will be plenty of competition.