Packers Are Out on DeSean Jackson 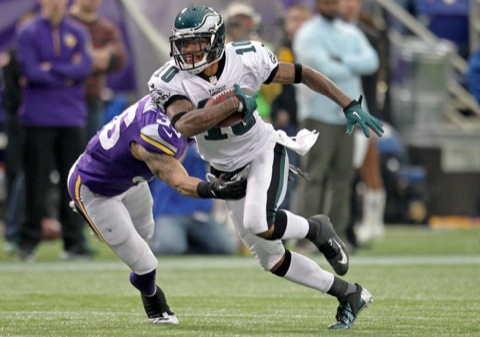 As if they were ever in… Receiver DeSean Jackson was released by the Philadelphia Eagles last week. If you had any dreams of the Green Bay Packers signing him, you can now put those to rest.

The Packers are not interested, according to Ed Werder.

Re: @DeseanJackson10: We know Skins interested; expect Panthers, Raiders and Jets involvement. Have been told Saints, Packers, Pats are out

What we don’t know if is the Packers were interested. Werder doesn’t really explain much more than what you see above.

It’s entirely possible the Packers checked into the situation and didn’t like Jackson’s asking price. There have been reports that said price is pretty high.

That shouldn’t really be a surprise. The guy had 1,332 yards and nine touchdowns last season. He surely sees himself as a No. 1 receiver and thus wants to be paid like one.

While he’d be a nice luxury for the Packers to have, they don’t really need him. They’ve already got a guy in the same mold in Randall Cobb. They also have to work out contract extensions for Cobb and Jordy Nelson, both of whom are entering the final year of their current deal.

Previous Article
Yes, Aaron Rodgers Was There for the Wisconsin Badgers on Saturday
Next Article
Kelly Hall and Butterball are Engaged